The City of Mississauga hosted its inaugural National Indigenous Peoples Day (NIPD) event in collaboration with Mississaugas of the Credit First Nation (MCFN). The celebration, held at Mississauga Celebration Square, featured an official ceremony with remarks and greetings from City and Indigenous leaders, an artisan market, traditional foods and headline performances by the Manitou Mkwa Singers and Mohawk singer-songwriter, Logan Staats.

Tonight’s event marked the first time the City officially celebrated NIPD, but it won’t be the last, according to Mayor Bonnie Crombie.

“Our goal was to recognize and celebrate the importance of the Indigenous people who have shaped the history of Mississauga and Canada and reaffirm our commitment to Truth and Reconciliation,” said Mayor Bonnie Crombie. “National Indigenous Peoples Day will be celebrated in Celebration Square for many years to come and we will continue to strive to support and strengthen our relationship with the Indigenous community in all aspects of our work at City Hall.”

On February 16, 2022, Mississauga became the first city in Canada to raise the Every Child Matters flag. Following a traditional smudging at the base of the flag pole, Mayor Crombie alongside Gimaa (Chief) Stacey Laforme, MCFN raised the flag.

“I want to say miigwech to the city of Mississauga for the opportunity to collaborate on this event,” said Gimaa (Chief) Stacey Laforme, Mississaugas of the Credit First Nation. “Indigenous Peoples Day is a day for celebration and reflection. It was meaningful seeing the incredible Indigenous artists featured tonight, as art has a great responsibility to awaken the world. Art can and should change the world. That is why we were proud to play a part in this event.”

Although this was the inaugural NIPD celebration, the City has been working on various initiatives to support and strengthen its relationship with the Indigenous community, including:

Did you know how Mississauga got its name?

In 1967, residents of Toronto Township overwhelmingly voted in favour of re-naming their new town ‘Mississauga’. There are many different interpretations of how this word came to exist with the most likely that it is an Ojibwa word meaning ‘river of many mouths’.

The City of Mississauga wishes to thank and acknowledge the Anishinaabe peoples who came to be known as the Mississaugas of the Credit for its name.

Over the past few years, the City has made several changes and implemented various enhancements to ensure that all residents, businesses and partners who choose to live, work and learn in Mississauga have the same, equitable experience. 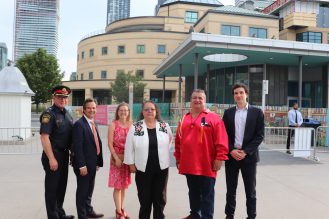