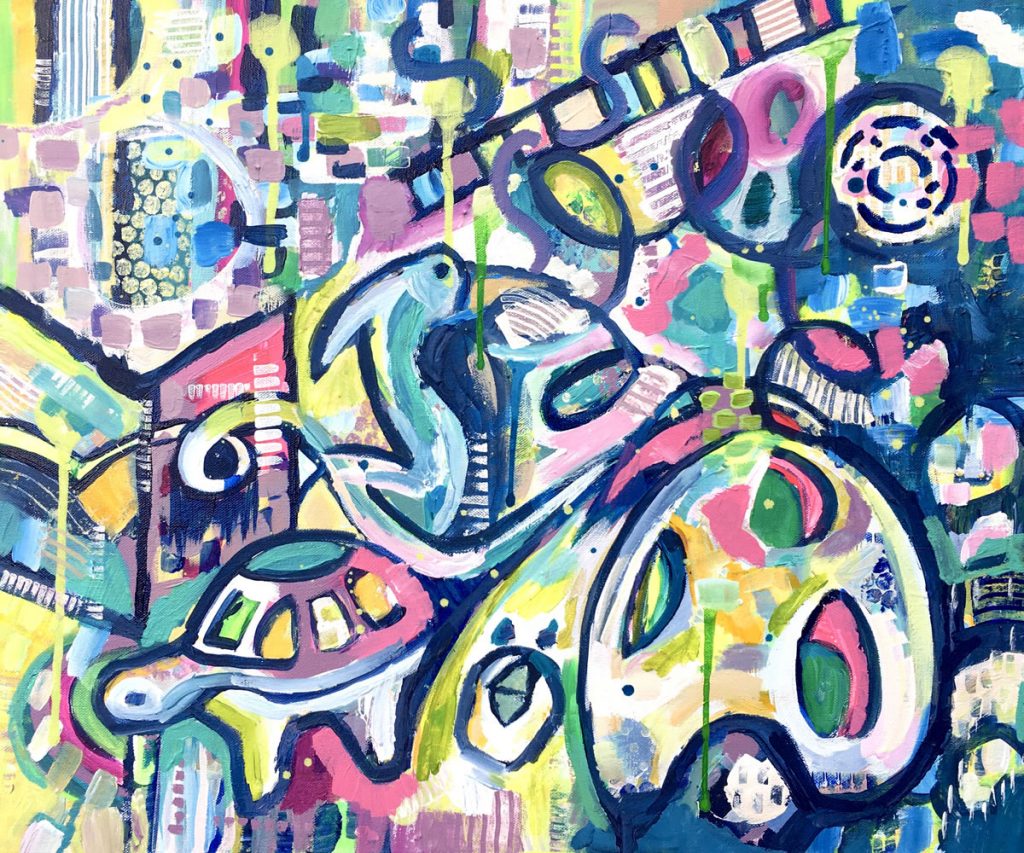 I have chosen to illustrate the Meadowvale area. I am excited to showcase this neighbourhood from my own point of view and preserve this pivotal moment in time on canvas.

During this pandemic, I have had the opportunity to take in the beauty that surrounds me. I have had time to sit and smell the flowers and even paint a few! I live near Windwood Park at Britannia and Winston Churchill and enjoy taking in my experiences through daily walks and bike rides. I have tried to capture the beauty of the Meadowvale area including the Lake Aquitaine trail and Lake Wabukayne trail.

I started my process by photographing sections of my community that captured my eye. I put these photos onto my tablet and outlined the object I wanted to feature in the project.

then moved around all the objects I drew until there was a frame that I liked and then I digitally added colours and texture.

I transposed the digital art onto canvas by sketching it with pencil, using blue to outline the colours as this is part of the City of Mississauga logo. I worked on sections of the artwork to add bright and bold colours that represent my vibrant community. I used bubble wrap, foam stamps, and stencils to create interesting textures.

I am someone who notices and appreciates the beauty of light hitting clouds a certain way, the various shades of purples in the lilacs, the shadows casted from the trees in full bloom and all the wonders around me.

I have taken in a slice of this moment, taking in the colours, the shades and hues to capture this part of Mississauga in my painting.

Angela Chao has excelled in her career as a female filmmaker with the IATSE camera department for over 14 years, working on notable Hollywood blockbusters such as the Saw franchise and Kickass 2.

Angela suffered three major head injuries on set and was left with health challenges such as depression and anxiety. After her concussion, Angela became a prolific artist. Three years later Angela is still using art as her tool to communicate her emotions.

Angela was invited to be guest speaker at the Brain Injury Association of Canada conference in Toronto. She was awarded a yearlong International ad campaign with Mercedes AMG on their social networks, speaking about her challenges from her brain injuries.

Angela’s short documentary showcasing her struggles from her brain injury and triumphs through art was selected by Cineplex and funded by Sun Life Financial to appear in all 1,600 Canadian Cineplex theatres across Canada, for one week during July 2017.

The big reveal with Councillor Saito

At the end of this process, I revealed the artwork to Councillor Pat Saito of Ward 9, who has been a city councillor for the past 29 years. She has been supportive of the development and creation of art around Meadowvale, like the tree carvings of the blue heron as shown in my piece of art.

For the Fossil Sculpture, a commissioned public artwork, her one requirement was that it needed to be an interactive piece of art where children could climb through the sculpture.

The murals project started in 2010, Councillor Saito wanted all the underpasses of the Meadowvale area leading up to Lake Aquitaine and Wabukayne to be filled with colourful art, painted by high school students in the Meadowvale area. I have taken all these elements I have seen and experienced in my area and captured it onto the final canvas artwork.