Over the past two years (2021 to 2022), the City of Mississauga Animal Services has reported a decline in coyote incidents by approximately 81 per cent, with no reported coyote incidents involving humans. An incident is any reported physical interaction involving a coyote, a pet, or a human. The stats provided included information from the City’s interactive coyote map.

“While coyote incidents are down, we can’t always predict what coyote behaviour will be in a given year. We are thankful that residents are following and listening to the guidance and safety advice we have been providing,” said Jay Smith, Manager, Mississauga Animal Services. “In most cases, coyotes pose little risk to humans and pets. However, encounters do happen which is why education and awareness is so important. We know the best approach to limiting and reducing incidents between people, pets, and coyotes is to continue proactively educating, creating awareness, and providing safety information to the community.” 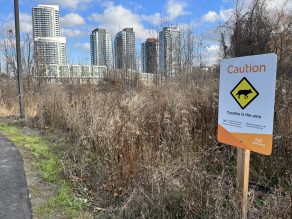 Coyotes play a vital role in our ecosystem, aiding in controlling rodent, rabbit, and goose populations and addressing diseased or deceased wildlife. Many residents remain dedicated to reporting sightings and referring to the City’s interactive coyote map to check if coyotes have been seen in their neighbourhoods.

Smith added, “While seeing a coyote can be intimidating, the risk of encountering a coyote remains low as many coyotes try to avoid humans. At the same time, coyote sightings are more prominent in the winter as they have less coverage, and their fur contrasts against the snow. Winter (December – March) is also coyote mating season, so they may be seen in more populated areas looking for a mate. If you observe or encounter a coyote in Mississauga, please report sightings to Animal Services.”

Do Not Feed Coyotes

Feeding coyotes or any wildlife can change their everyday behaviours and is against the City of Mississauga bylaw. Coyotes are usually not a threat to people but can become a nuisance or bolder when people feed them or provide sources of food they become accustomed to. They may become “conditioned” or unafraid of people, resulting in coyotes returning to the locations they are being fed, such as schoolyards, residential properties, and parks. Feeding coyotes can also cause illness or disease, affecting the balance of our fragile ecosystem.

Under the City’s Animal Care and Control By-law, feeding wildlife is illegal and people can be fined a minimum of $300. This includes leaving food out, food waste, and disposing of food in natural areas.

Residents are encouraged to exercise caution when outdoors and are reminded not to feed wildlife as per the by-law while ensuring public areas and neighbourhoods are free of food waste.

Eastern Coyotes are distinguishable from dogs and wolves. They come in a variety of colours and shades, weighing approximately 25-45 lbs. Their fur grows thick in the winter to protect them from the harsh winter weather. This results in the coyote appearing larger than it actually is. Animal Services occasionally receives calls for ‘Coywolves’ or wolf sightings. The City of Mississauga does not have wolves or ‘Coywolves’, Mississauga only has Eastern Coyotes. While Eastern coyotes share ancestral DNA with the domestic dog, the Western coyote, and Eastern and Western wolves, the initial cross-breeding happened more than 100 years ago. The term “Coywolf” is not a designated subspecies.

Safety measures to take if you encounter a coyote

Here are some important reminders to protect yourself, your pets, and your property.

Protecting your pets from coyotes:

Keeping coyotes off your property: