The City of Mississauga is celebrating the end of summer with two open street block parties and everyone is invited!  It’s all part of Sharing Lanes, our tactical urbanism project that has temporarily transformed parts of the City’s Downtown and Cooksville neighbourhoods into people-friendly gathering places this summer. The main goal of Sharing Lanes is to put people first by making our streets inviting and accessible for all.

During each Block Party, we’ll be taking over Jaguar Valley Drive in Cooksville to make way for family-friendly street programming. Get ready for local restaurants and food trucks serving up tasty treats, outdoor games and an opportunity to connect with friends and neighbours.

We’re also excited to announce that the City’s popular Summer Concert Series is being extended to bring some of Mississauga’s best local artists to the Block Party stage.

The City of Mississauga is hosting two Sharing Lanes block parties in Cooksville featuring food, music and fun for everyone.

1:45 p.m. – Five and Tens presented as part of the Summer Concert Series

3 p.m. – The InfraRed Band presented as part of the Summer Concert Series

1:45 p.m. – Cmagic5 presented as part of the Summer Concert Series

Sharing Lanes is a tactical urbanism project that temporarily transforms city streets for the benefit of pedestrians and residents. The City’s Summer Concert Series brings free, family-friendly concerts to parks and public spaces while showcasing local talent. Heart Comonos is a community group that invites people to come together in Cooksville to share their ideas, gifts, skills, knowledge and life experiences. Together they create events and projects that enhance individual and community wellness.

Sharing Lanes will wrap-up in late-September. Learn more and tell us what you think about the installations by taking a five-minute survey: yoursay.mississauga.ca/sharing-lanes 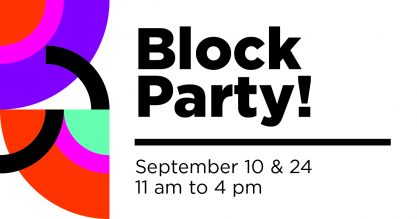