With the soaring price of gas, there is expected to be a spike in interest in electric vehicles by Mississauga residents. An electric vehicle (EV) can be fully or partially (hybrid) electric and is known to be efficient and durable, requires less maintenance and can have a longer lifetime than traditional gas-powered vehicles. 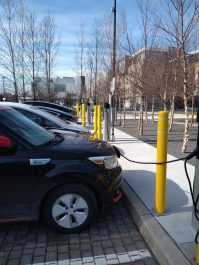 According to Stats Canada, in the third quarter of 2020, 3.5 per cent of total new vehicles registered in Canada were zero-emission vehicles (ZEVs). In Ontario, however, only 1.8 per cent of new vehicle sales were ZEVs, well below the Canadian average yet still trending up from the previous year. Last year, the Government of Canada announced a mandatory target for all new light-duty cars and passenger trucks sales to be zero-emission by 2035. As more than 30 per cent of Mississauga’s greenhouse gas (GHG) emissions come from transportation, electrification of vehicles is a crucial way to reduce future emissions.

While some Canadians are still wary about letting go of their gas-guzzlers, many can get past the range anxiety and higher upfront costs to own and see the environmental benefit and economic value of switching to EVs. Electric vehicles have come a long way, with driving ranges of 300 to 500 kilometres for most new models.

So why the push for EVs?

There are many environmental and economic reasons. In Ontario, electricity is made from clean and renewable energy sources. That means, charging your vehicle has little impact on air quality and GHG emissions. Switching to an EV avoids around 5 kg of GHG emissions for a short 25 km trip. Electric vehicles use lithium-ion batteries, which are recyclable. They are quick and easy to recharge. Another major benefit is that electricity is a lot more affordable than gas. So every time you charge your vehicle, you’re saving money.

As EV sales continue to climb, more people are considering making the switch.  There is a demand for more accessible, fast, and convenient charging infrastructure across the city. Charging stations are plug-in ports that provide electrical power for electric vehicles.

How are Mississauga residents feeling?

According to a recent survey commissioned by the Toronto and Region Conservation Authority many Peel region residents, including Mississauga residents, believe that a shift to EVs will help reduce climate change and lead to other environmental benefits.

The survey found that more than half felt the most common barrier for EV ownership is cost and lack of public charging stations. Many respondents want to see their municipality help accelerate the adoption of EVs, including the installation of EV chargers at municipal facilities.

The City of Mississauga is adding to the growing number of public charging stations available to Mississauga residents, which are operated by private companies or public-private organizations. EV chargers can be found conveniently along our highways, roadways, malls and other destination points. 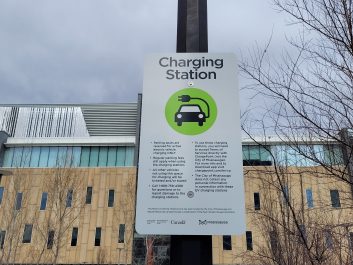 The City is increasing charging infrastructure through commitments made in Mississauga’s Climate Change Action Plan. To date, the City has installed 12 ChargePoint Level 2 public EV charging ports, adding to the more than already 400 charging ports available across the city. While the chargers are free to use, they are located within municipal parking lots where parking rates will apply. The new City-owned EV chargers include: 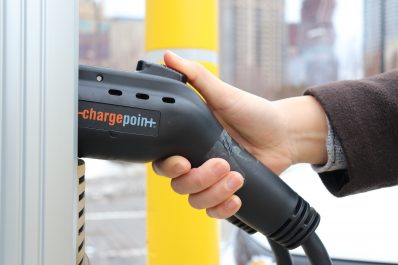 The two locations were chosen based on proximity to city facilities and destinations and demand.

These charging stations were made possible through the City’s participation in the Peel Climate Change Partnership and a $207,000 investment through Natural Resources Canada’s Zero Emission Vehicle Infrastructure Program (ZEVIP), which has resulted in a total of 43 EV chargers across 11 sites. 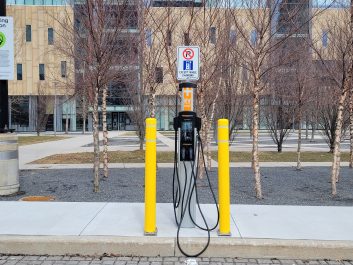 Investing in charging infrastructure will help Canada achieve its long-term goal of net-zero emissions by 2050. The City’s joint participation in the program also shows a commitment to fighting climate change and supports the City’s own Climate Change Action Plan goal of reducing GHG emissions. 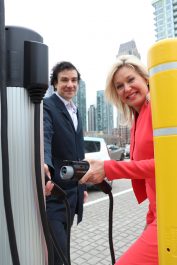 The City is also working with the Region of Peel, City of Brampton, Town of Caledon and local conservation authorities to develop a Zero Emission Vehicle Strategy. The strategy will be an initiative of the Peel Climate Change Partnership and through the strategy, the partners will continue installing public EV chargers in municipal spaces.

With the operational cost and environmental benefits as well as the growing range of vehicle makes, models and incentives, now more than ever is a great time to invest in a new or used electric vehicle. 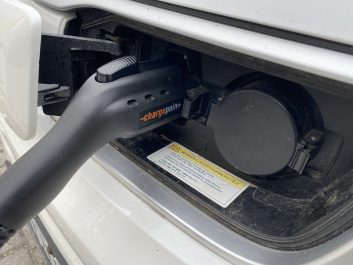 Through the Federal Government’s iZEV Program many different models of zero-emission vehicles are eligible for an incentive of up to $5,000 on the purchase of a new EV.

In Ontario, drivers can access two incentives offered by Plug’n Drive when purchasing a used EV:

“This is great news for Mississauga, as we need to continue supporting residents during this shift towards more sustainable and environmentally friendly modes of transportation. I want to thank the Government of Canada for their continued investments in Mississauga that will help us reach our climate goals. These EV chargers expand the City’s network of charging stations and support the thousands of electric vehicles that are already being used on our roadways.”

“We’re making electric vehicles more affordable and charging more accessible where Canadians live, work and play. Investing in more EV chargers, like the ones announced today in the Region of Peel, will put more Canadians in the driver’s seat on the road to a net-zero future and help achieve our climate goals,”

“The City of Mississauga has an important role to play in ensuring there is adequate supply and access to charging infrastructure in public places. This is an important step to helping the City reduce greenhouse gas emissions. With the right infrastructure in place, we can hopefully influence a change that will see a decrease in the number fossil-fuel cars and an increase in electric vehicles on our roadways.”