A presentation of the Order of Rising Sun from the Government of Japan to Ward 6 Councillor Ron Starr was held at today’s virtual meeting of Council.

On November 3, 2020 the Government of Japan announced recipients of its 2020 Autumn Imperial Decorations with Councillor Starr as one of three Canadians within the jurisdiction of the Consulate-General of Japan in Toronto to receive the Order of the Rising Sun Gold and Silver Rays.

“I congratulate Councillor Starr on receiving this well-deserved international honour. Councillor Starr received this award for his long-time work promoting friendship and mutual understanding between Japan and Canada,” said Mayor Bonnie Crombie. “Ron’s work as the Chair of the Mississauga Friendship Association (MFA) has had far-reaching impacts, especially on our relationships with our Sister City, Karyia, Japan. MFA events, cultural exchanges and homestay visits for Kariya and Mississauga students have been instrumental in strengthening the connection between our two cities.”

The Order of the Rising Sun is bestowed upon individuals of merit, in recognition of their outstanding contribution to the nation or public and who have made distinguished achievements in international relations and promotion of Japanese culture. It is the third highest order presented by the Japanese government. Upon the announcement, Mr. Motegi Toshimitsu, Minister for Foreign Affairs of Japan, sent a congratulatory message on the honour. Councillor Starr is the second in the Region of Peel to receive the Honour. Former Mayor Hazel McCallion received the Order of the Rising Sun, Gold Rays with Rosette in 2014.

“I am humbled and honoured by the recognition,” said Ward 6 Councillor Ron Starr. “It is wonderful to experience and be part of the Japanese culture. I enjoy my work and look forward to continuing building strong relationships with Japan and our Sister City Kariya. I encourage others to become involved in organizations such as the Mississauga Friendship Association. The learnings and teachings from the exchanges to all parties are invaluable.”

“Mr. Starr, as Vice Chair of Mississauga City Council’s Celebration Square Events Committee, proposed and implemented a large-scale Japanese cultural event which became Japan Festival CANADA. This festival, which began in 2016, provides a comprehensive and varied overview of Japan. Its attendance reached to 90,000 for its fourth instalment in 2019, making it the largest Japan festival in North America. As well, in May 2018, his efforts helped make possible the reception hosted by the City of Mississauga celebrating the 90th anniversary of Japan-Canada diplomatic relations. When Mississauga celebrated the 30th anniversary of its Sister City relationship with Kariya in 2011, as well as the 35th anniversary in 2016, Mr. Starr took charge as City Councillor in welcoming the delegation from Kariya as well as in organizing various events.”

Mr. Starr for many years took pains to foster goodwill toward Japan and to raise awareness of the various social contributions being made by Japanese corporations. In 2019 he organized a meeting with the members from Aichi Prefectural Assembly with the aim to strengthen economic relations. Aichi is the prefecture in which Kariya, Mississauga’s sister city, is located. 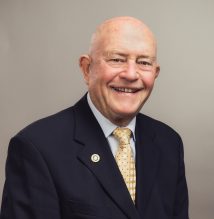 Order of the Rising Sun
Gold and Silver Rays