The City of Mississauga is recognizing the International Day of Persons with Disabilities taking place December 3, 2015. From provincial recognition of staff and volunteers, facility design and a universally accessible video, the City is empowering people of all abilities by providing barrier free access to all residents, visitors and employees.

Four members of the Mississauga community were presented with the AODA 10th Anniversary Champion Award at General Committee today:

“It’s wonderful to have Mississauga AAC members, staff and volunteers acknowledged on a provincial level for the difference they make,” said Pat Saito, Ward 9 Councillor and member of the AAC. “These recipients are a great example of the many ways Mississauga improves opportunities for persons with disabilities.”

The award, coordinated by the Association of Municipal Managers, Clerks and Treasurers of Ontario (AMCTO) and the Government of Ontario, recognizes accessibility champions across the province who demonstrate leadership, passion and commitment in the promotion of awareness of accessibility and inclusiveness in their community. 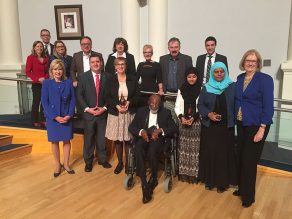 The City has released its 2015 Facility Accessibility Design Standards (formerly the Mississauga Accessibility Design Handbook). This updated document outlines City-wide standards that are applied to all new and/or renovated City owned, leased or operated facilities. In addition to municipal facilities, the City encourages their use throughout the community.

The updates include changes from the Ontario Building Code 2012 (including 2015 accessibility updates) and the Accessibility for Ontarians with Disabilities Act’s (AODA) Design of Public Spaces Standards (O. Reg. 413/12) among others.

“These standards build a universally designed and accessible community for residents, visitors and employees,” said Matt Mahoney, Ward 8 Councillor and member of Mississauga’s Accessibility Advisory Committee (AAC). “They benefit families with young children, older adults and visitors to City facilities among others.”

Learn why Mississauga is a great place to live, work, travel and play for everyone

The City has launched its first universally accessible video featuring the unique stories of five persons with disabilities. Audiences can watch, listen and/or read as these individuals experience Mississauga through the accessibility principles of respect, inclusion, equal opportunity, dignity and independence.

“This video showcases the great work we have done to improve services, facilities and programs for everyone including persons with disabilities,” said Diana Simpson, Mississauga’s Accessibility Coordinator. “It was designed with many accessible features so persons of different abilities can enjoy the video at the same time.”

The format of the video includes accessible features like closed captioning and descriptive narration providing access to those with visual and hearing disabilities. Watch it here.