Consider a low-cost trip around the City by discovering Mississauga landmarks using transit.

Plan your trip using the online trip planner or by calling 905-615-4636 (INFO) to speak to a friendly customer service representative. Snap a pic and share it with us on Twitter through @MiWayHelps.

The red and white lighthouse can be seen from afar, welcoming everyone who approaches. Built-in 1991 to replace the original lighthouse destroyed by fire in 1936, it is a working lighthouse visible from Lake Ontario (Port Credit is an international border entry point into Canada by water). The deck offers a great view of the Credit River, as well as the beautiful harbour and the village of Port Credit. The lighthouse is one of the most photographed landmarks in Mississauga.

Enjoy a self-guided tour of the Civic Centre or grab a bite to eat at C Cafe. When you visit the Civic Centre, experience highlights including the 30-metre diameter domed ceiling of the Council Chamber, which pays tribute to Mississauga’s historic villages and First Nations’ tradition. The award-winning postmodern architecture of the Mississauga Civic Centre, opened in 1987, includes design elements that pay tribute to the area’s agricultural past: the main building represents a farmhouse, the Council Chamber represents a grain silo, and the clock tower a windmill. Wander leisurely through the public Art Gallery of Mississauga which features works by local and national artists. The Art Gallery is open year-round and admission is free. Please note the Great Hall is currently under renovation. Queen Elizabeth II Jubilee Garden also part of the site was originally named Civic Garden Park or the Rose Garden. This garden has been part of the Civic Centre since it was originally dedicated on July 18, 1987, by The Duke and Duchess of York. Fifteen years later in October 2002, Buckingham Palace agreed to have the garden formerly named The Queen Elizabeth II Jubilee Garden in commemoration of Her Majesty The Queen’s 50th Anniversary of Her Accession to The Throne. 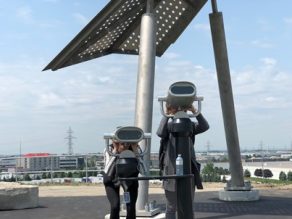 If you like watching planes take off – catch the flightpaths of jets from Danville Park’s airplane viewing platform. Soaring 25 metres above the surrounding area, the platform is an excellent location for viewing planes leaving Pearson International Airport and will celebrate the aircraft industry’s contribution to Mississauga’s development. 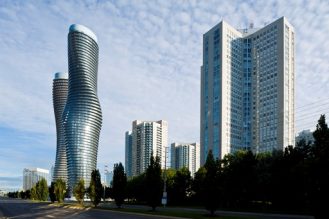 Meet Marilyn: one of two Absolute World Condos soaring 56 and 50 storeys high; the tallest earned its nickname due to the design’s curvaceous hourglass figure. The buildings were completed in 2012 following an international design competition. The unique 209-degree twist from the base to the top provides residents with unobstructed views of the city and beyond.