The City of Mississauga is pleased to unveil the newly-upgraded City Centre Transit Terminal (CCTT) facility to the community. In February 2020, the CCTT underwent a complete interior renovation to transform the downtown Mississauga hub into a modernized space with improved accessibility and services for MiWay customers.

“Our City Centre Transit Terminal is the busiest MiWay bus terminal in our downtown, serving over 40,000 customers per day and offering key connections to other regional transit systems,” said Mayor Bonnie Crombie. “Ensuring it is a modern, convenient and accessible space, reinforces our commitment to building a transit-oriented city – reducing our reliance on cars and making transit a real choice for residents and commuters. On behalf of Council, I’m pleased to re-open this new and improved facility that will make transit more attractive and better serve all passengers.”

Built in 1996, the CCTT is located just north of Square One in downtown Mississauga. Some of the new terminal features include:

Through the MiWay 5 service plan (2016-2020), MiWay service moved to a grid network to enable more frequent and direct service along main roads, as well as other service benefits, including an expanded express network, improved service frequencies along major corridors, expanded hours of service throughout the week and improved network connections to major destinations and Mississauga Transitway service. The CCTT plays a key role in bringing these service plan benefits to life and is a key part of the City’s Mississauga Moves Transportation Master Plan.

“This facility is an important part of the customer experience for many transit riders. That is why during the renovation, it was critical that customers could access the terminal building and construction was completed in phases,” said Geoff Marinoff, Director, Transit. “Over 900 buses pass through this terminal every day, connecting riders to destinations inside and outside of Mississauga. As a station along the Mississauga Transitway, it facilitates connections with GO and Brampton Transit buses and, in the future, with Hurontario Light Rail Transit service.”

Mississauga is focused on becoming a transit-oriented city. Recent improvements include:

Construction on Rathburn Road in front of the CCTT for the Hurontario Light Rail Transit (LRT) will be ongoing throughout the fall. Some bus stops will be temporarily relocated due to the construction. Customers are encouraged to watch for posted stop notices.

To learn more about the CCTT, visit miway.ca/CCTT or watch the video. 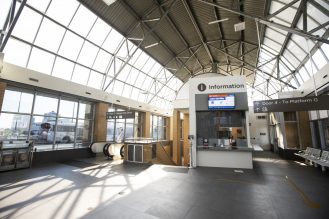