Mayor Bonnie Crombie will share a special video address to Mississauga residents as part of the Mayor’s annual New Year’s Levee tradition. The Mayor’s Levee is typically a time when residents have the opportunity to meet the Mayor and Members of Council for a family-friendly event at the Civic Centre; however, this year’s Levee is being delivered virtually.

Mayor Crombie’s New Year’s greetings to residents and Council’s best wishes for the upcoming year will be available online on Sunday, January 10, 2021 at noon on the City’s YouTube channel.

The Mayor’s Levee is a tradition that dates back to the 17th century, during the reign of King Louis XIV. To show the monarch belonged to the people, the King would invite gentlemen to his bedroom on New Year’s Day to watch him wake up and begin serving the public. The Royal Governor of New France later brought this custom to Canada where it continues to be a new year’s tradition. 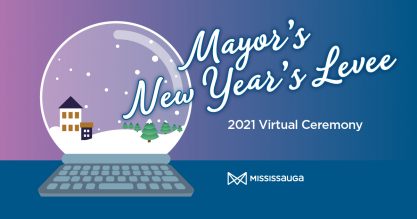