The City of Mississauga’s Civic Centre was declared the winner of the 2015 national Town Hall Challenge by the Toronto and Region Conservation Authority. The award was presented earlier today at City Council.

The goal of the Town Hall Challenge was to reach an energy intensity level of 20 equivalent kilowatt-hours per square foot by the year 2015. The City achieved this goal in 2013 and by 2015 the energy intensity was further reduced to 17.2 equivalent kilowatt-hours per square foot. Energy intake was reduced in the Civic Centre building by 17 per cent between 2012 and 2015.

“At City of Mississauga we take our pledge of sustainability seriously. I am proud of our team and the energy saving initiatives we achieved at our Civic Centre,” said Mayor Bonnie Crombie. “We are leading by example. Continually seeking opportunities to save energy and reduce the impact on our environment. I encourage Mississauga residents to follow the City’s example and take action where they can to reduce their energy use both at work and home.” 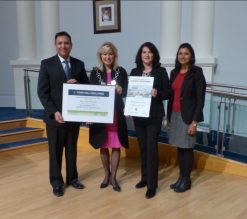 “Some of the improvements made to the Civic Centre during the challenge included upgrading building automation systems, maintenance programs and training,” said Raj Sheth, Director, Facilities and Property Management. “Alongside these improvements, City employees also took action by participating in energy awareness programs and making energy saving part of their daily routine. Combined, these actions helped the City of Mississauga significantly conserve energy and reduce greenhouse gases.”

Sheth added that in 2015, a real-time energy dashboard pilot was launched at the Civic Centre. The new dashboard provides staff and visitors to the Civic Centre with daily, weekly and monthly energy and water use stats helping to further raise awareness of the importance of energy conservation.

About the Civic Centre

Located at 300 City Centre Drive, the Mississauga Civic Centre is home to the City’s municipal offices, Central Library, the Art Gallery of Mississauga, a conservatory and a wedding chapel. Facilities include underground parking and an outdoor ice rink.

About the Town Hall Challenge

The Town Hall Challenge, led by the Toronto and Region Conservation Authority was conducted from 2012 to 2015, with municipalities across Canada invited to work towards a target of 20 ekWh/ft2 (68 kBtu/ft2) of total energy use by the year 2015. The initiative led to substantial energy efficiency improvements in participating buildings, several of which (including the Mississauga Civic Centre) met the target.