Mississauga Is Getting Ready for Spring

City crews are taking advantage of the milder weather and are busy filling potholes, performing minor repairs to infrastructure in the roadway, clearing litter and preparing roads and residential areas for street sweeping.

Potholes usually occur through the winter as temperatures fluctuate. Weather changes cause water under the asphalt to expand and contract.

In a given year, City crews fix hundreds of potholes with asphalt compacted and smoothed out on roadways. In 2022, there has been a 75 per cent increase in the number of potholes that have been reported in need of repair. Approximately 400 tonnes of asphalt is used for road repair each year.

Repairing potholes is an affordable way to maintain City roads until permanent repairs can be performed. Potholes are usually fixed throughout the spring and each pothole takes roughly 20 minutes to fill. However, crews will repair potholes during the winter months when temperatures are warmer or during emergency situations.

To report potholes and damage to a sidewalk, curb or sod, call 311 (905-615-4311 outside City limits), use the Pingstreet mobile app or submit an online service request.

Street sweeping removes debris, litter and pollutants from entering the City’s stormwater system and eventually making their way into Lake Ontario. The program also improves the cleanliness and aesthetics of City streets and boulevards.

The City’s Works yards continue to store snow-clearing equipment until the end of the winter contract in early April. Remember, when the street sweeping program begins, please remove parked vehicles and avoid raking leaves and grass clippings onto the road.

This is also around the time when Parks and Forestry crews are busy getting the City’s green spaces like parks, forests and trails ready to welcome back users. Additionally, they support the maintenance crews by trimming trees, hedges and bushes away from roadways and sidewalks. Contractors will begin performing maintenance operations on recently planted trees, including burlap removal, minor pruning, replacing tree stakes and reforming mulch saucers – this work generally begins at the beginning of March, weather pending.

While spring cleaning activities happen, residents can also expect the City’s construction season to begin at the end of April. Construction projects include work on roads, bridges, creeks, sewers, watermains and other types of infrastructure. As construction gets underway, residents can use the construction map to plan alternate routes to avoid traffic.

Residents are reminded to please be alert and safe during these periods of spring and construction activity:

Annually the City spends upwards of $95.4 million on maintaining, designing and constructing roads. The City’s budget shows that roads make up 9.2 per cent and have steadily increased (by $2.2 million in 2022). As the City continues growing, more people are using roads, sidewalks and bike lanes while the increased demand for more connected infrastructure persists.

Approximately 5,700 kilometres of roads and on-street bike lanes, and 1,700 kilometres of sidewalks are maintained by City crews. This maintenance ensures people can move freely, easily and safely by vehicle, transit, cycling, walking and other modes of getting around. For more information about street and road maintenance, visit mississauga.ca/roads. 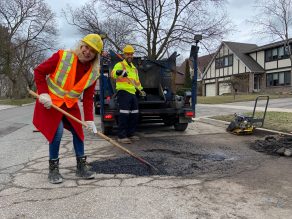 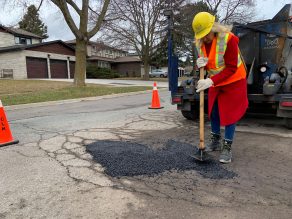 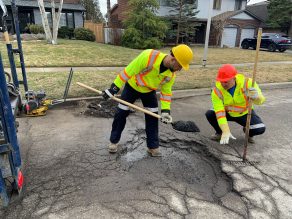 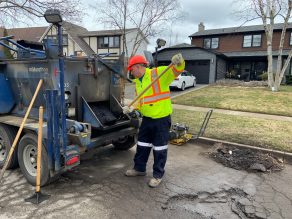 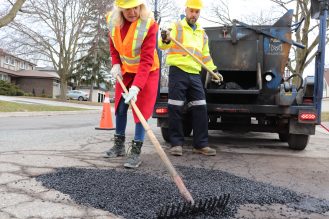 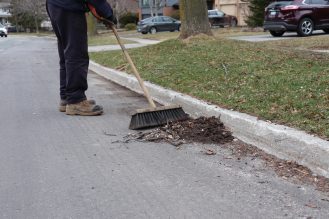 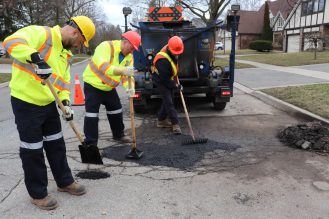