Mayor Bonnie Crombie presented Dr. Mohamad Fakih with a Key to the City on Thursday, November 14 at the Mississauga Board of Trade 2019 Business Awards of Excellence where he was also named their Business Person of the Year.

Dr. Fakih is the CEO and President of Paramount Fine Foods and is well-known in the community for his business and charitable achievements.

“The Key to the City of Mississauga is the City’s most prestigious form of recognition and I can’t think of anyone more deserving than Dr. Mohamad Fakih. Mohamad is an outstanding, hardworking entrepreneur who continues to gives back to our community and beyond,” said Mayor Bonnie Crombie. “He is a champion for diversity and inclusion and a true community leader. He shares his success with others and continues to support those who need it most. From supporting my city-wide food drive to hiring hundreds of Syrian refugees and calling upon others to do the same, Mohamad is helping ensure that everyone in our city has an equal opportunity to succeed. When the lives of six Muslims were claimed in a Quebec mosque shooting, Mohamad raised funds to pay for the victims’ funerals and repairs to the mosque. And on several occasions, Mohamad has acted as an advocate for diversity and inclusion and a voice for new Canadians.”

Crombie added, “Presenting Dr. Mohamad Fakih with the City’s highest honour is our way of saying thank you on behalf of all Mississauga residents. He is a valued community member and inspiration to us all.” 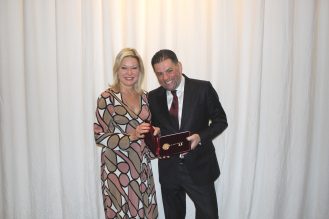 Mayor Bonnie Crombie presents the Key to the City to Dr. Mohamad Fakih on Thursday, November 14 at the Mississauga Board of Trade 2019 Business Awards of Excellence. 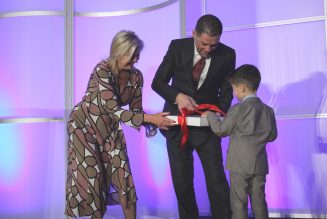 Dr. Mohamad Fakih, alongside his son, unwraps the Key to the City, presented by Mayor Bonnie Crombie on Thursday, November 14 at the Mississauga Board of Trade 2019 Business Awards of Excellence.

Dr. Mohamad Fakih, alongside his son, proudly accepts the Key to the City, presented by Mayor Bonnie Crombie on Thursday, November 14 at the Mississauga Board of Trade 2019 Business Awards of Excellence.

While primarily symbolic, the key signifies trust and freedom for the recipient to enter in and out of the city as they wish, knowing that Mississauga will always be their home.

Dr. Mohamad Fakih moved to Canada from Lebanon in 1999 when he was 23 years old. In 2006, Dr. Fakih purchased a nearly bankrupt restaurant and transformed it into what is now known as the fastest-growing Middle Eastern Halal restaurant chain in North America – Paramount Fine Foods. Paramount currently employs over 2,000 people with 65 locations under the Paramount brand. A community leader, Dr. Fakih regularly participates in fundraisers and community events, supporting multiple causes and organizations.  He has received countless awards and accolades for his business excellence and for his charitable works. Dr. Fakih has been a resident of Mississauga since he arrived in Canada.