Janice Baker, City Manager and Chief Administrative Officer (CAO) for the City of Mississauga is the recipient of a long-service pin from the Canadian Association of Municipal Administrators (CAMA). Baker is celebrating more than 25 years of working in the municipal sector in Canada. 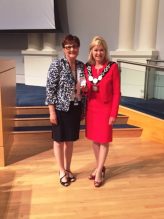 Baker joined the City in May 1999 as Commissioner of Corporate Services and Treasurer. She became City Manager and CAO in January 2005 after serving as the Acting City Manager since February 2004. She has received a number of awards including:

Baker has a Bachelor of Commerce degree from Memorial University and holds a designation as a Chartered Accountant (CA).

CAMA is a national, non-profit association open to all Chief Administrative Officers/City Managers and any person employed in a senior management position that reports directly to the CAO.

CAMA’s mission is to champion excellence in municipal administration through professional development, networking and advocacy