The City of Mississauga, in its partnership with the University of Toronto Mississauga, Sheridan College and CANARIE, has been awarded the 2018 MISA Ontario (Municipal Information Systems Association of Ontario) Excellence in Municipal Systems Award for Canada’s first “virtual campus”. Students, teachers and researchers can securely access post-secondary institutions around the world within City facilities where the free Wi-Fi network is available.
The recognition, awarded earlier this month at the MISA Ontario 2018 Annual Conference, is presented to an Ontario municipality that has successfully undertaken a significant initiative or set a new standard that other municipalities may follow. This is the fourth time the City has won this award in its 15 year existence.
Mississauga was the first city in Canada to launch eduroam (education roaming) a secure, worldwide roaming service provided by CANARIE in May 2017. The service is available in more than 70 countries and 17,000 locations worldwide.
“Mississauga will continue to push the boundaries as leaders in innovation,” said Mayor Bonnie Crombie. “This award reaffirms our City’s approach to building a truly smart city.” 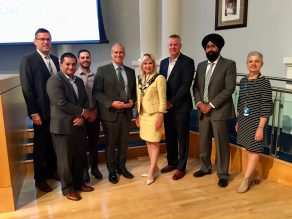 Since the launch last year, there have been more than one million eduroam logins through the Mississauga network to hundreds of post-secondary institution globally. Ghant University in the Netherlands ranks atop the list of international institutions with logins in Mississauga, while the University of Waterloo tops the Canadian chart.

“With the City offering free Wi-Fi access in more than 50 facilities, as well as many outdoor public spaces and parks, Mississauga has been transformed to become a ‘virtual campus’ that enables many from around the world to easily connect to their educational institution,” said Shawn Slack, Director of Information Technology and Chief Information Officer. “Implementing the eduroam service helps to create a city-wide ecosystem that better connects everyone to government and education, and supports learning, innovation and collaboration.”

The launch of the eduroam service in all City facilities allows Canada’s sixth largest municipality to advance its vision for a fully connected and engaged city.