The 2018 winner of the Phil Green Recognition Award goes to Ray Marentette.

Today, Mississauga City Council awarded Ray Marentette with the Phil Green Recognition Award for 2018. Ray began Mississauga’s first Slow Roll program in Port Credit. This is a casual group ride for riders of all levels and ages who cycle together on a biweekly basis.

The Phil Green Recognition Award is presented annually by the Mississauga Cycling Advisory Committee (MCAC) to a person or persons who show exceptional initiative in promoting or furthering cycling or other forms of sustainable transportation in the City of Mississauga. Phil Green is a Mississauga resident who worked tirelessly to promote safe cycling and riding as an alternative to driving. He is also the founding member of the MCAC.

“Ray is a shining example of a resident who is a self-starter and a leader in promoting cycling,” said Ward 3 Councillor Chris Fonseca, Chair of the MCAC. “He has more than tripled participation in his Port Credit Slow Roll from 13 people on his first ride to having an average of 50 riders. He has also encouraged others to begin a Slow Roll in Streetsville. He is an exceptional role model who has encouraged so many people to get on their bikes and give it a try.”

Marentette started bringing cyclists together for a biweekly casual 10 to 15 kilometre ride to enjoy the waterfront trail in Port Credit in the spring of 2018. When his rides gained popularity, he successfully received sponsorship from a local sporting goods store who supplied t-shirts for all of the Slow Roll riders.

For more information on the Phil Green award visit: mississaugabikes.ca/phil-green-award/ 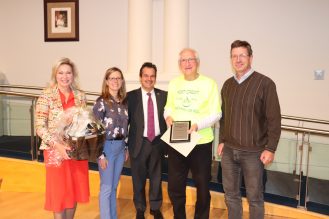 Ray retired to the Port Credit area of Mississauga in 2010. Ray’s hometown is Windsor, Ontario, and it was there that he became familiar with the successful Slow Roll rides in Detroit, Michigan that attract thousands of people.

Two years ago, Ray, then 80, got tired of seeing his bike in the storage room and made a pact with himself to get back to riding his bicycle. However, his wife expressed concern of him riding on his own. He decided to put up posters along the waterfront trail inviting people to join him for a casual ride. Thirteen people showed up for this ride and he hasn’t looked back since.

During the first year he had 150 riders who participated in a Slow Roll ride at least once and this year there were 200 regulars who participated. The rides attract cyclists of all ages but the majority of riders are older adults who enjoy time in the outdoors and socializing. He has inspired a similar Slow Ride in Streetsville with others on the horizon for 2020.

He was also involved with a bike valet that began at the Port Credit Farmer’s market and he plans to help bring bike valets to more local festivals. Next year, Ray has plans to expand his Slow Roll to five days a week with some bonus Sunday afternoon rides. If you are interested in learning more about the Port Credit Slow Roll visit his Facebook page by the same name.