As part of a pilot project, the City of Mississauga will be testing new temporary urban features on the sidewalks and roadway.

As part of a pilot project, the City of Mississauga will be testing new temporary urban features on the sidewalks and roadway. The project’s goal is to see how simple, low-cost enhancements can improve safety and the enjoyment of public space.

What:
Known as “tactical urbanism”, the City will temporarily install features including:

Why:
Tactical urbanism initiatives have been used by cities around the world to examine new ways to think about and enliven public spaces. City staff will evaluate the installations and welcome comments from the public via an online survey to be launched in June. Time-lapse video will be used by the City for the day of installation on June 7, 2019 to record the transformation of the streetscape.

How:
The road will be fully open and functional for road traffic including vehicles and bicycles. Some lanes will be narrowed with new protected bike lanes, added temporary planters and other features. On-street parking will be temporarily reduced to accommodate some of the features during the pilot project. There will continue to be a designated drop-off area for the Mississauga Civic Centre Child Care Centre. 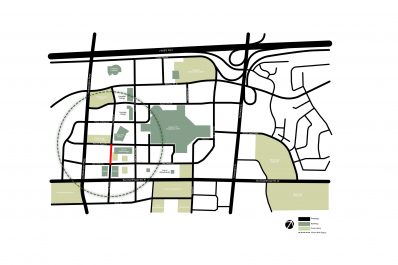