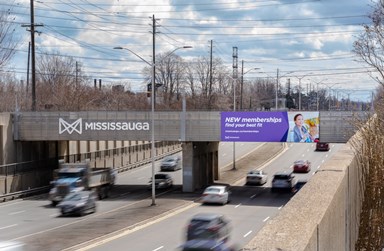 Van Horne Outdoor (VHO), a limited partnership between Canadian Pacific Railway (CP) and All Vision LLC, entered into an agreement with City of Mississauga to place digital signs at eight CP railway overpass locations in Mississauga. There will be one sign on each side of an overpass. City staff worked with various partners to ensure the signs meet by-law and road safety requirements and lighting standards.

Who owns the signs?

Van Horne Outdoor (VHO), a limited partnership between Canadian Pacific Railway (CP) and All Vision LLC, is responsible for paying for all of the upfront and ongoing cost to install and maintain the signs. In addition, VHO made a financial contribution into improving lighting underneath the bridges to improve pedestrian safety.

How many signs will there be and where will they be located and when will they go up?

The installation of the signs is to be fully completed by the end of 2019.

How will the City benefit and what do we get?

The City benefits from bridge improvements, permanent branding, and the use of 10% of digital signage time to promote community messages and initiatives, including public service announcements, amber alerts, and information on City services and programs.

Are the signs safe?

VHO hired a very well-respected Engineer who specializes in transportation matters and has worked extensively on digital signs, conducting traffic research examining the relationship between digital billboards and traffic safety. The Engineer analyzed similar installations existing on bridges in the GTA and the proposed locations in Mississauga and concluded that all of the installations were safe from a traffic perspective. VHO is also following the City’s Guidelines and By-Laws pertaining to Billboard Signs and Traffic Safety. A complete Urban Design Impact Assessment was also completed for each location.

Are the signs monitored for brightness?

The signs are equipped with a photocell which automatically adjusts the brightness due to ambient light. As the sun sets the screen automatically dims to adjust to darker conditions to ensure the higher brightness levels needed during the day are adjusted down in the evening time. In the evening VHO operates the signs at 200 nits (a unit of luminance measurement), an approximately 35% lower level than what the City’s guideline suggests for night-time brightness.

Is there a cost to the City for the signs?