What Does the Fox Say? Keep Me Wild – Don’t Feed Me!

The City’s Animal Services team has recently received a lot of reports of fox sightings. You may have seen one in a park, crossing a trail, running across a street or appearing in your backyard. Most of the time you can find them trying to find food. Foxes tend to be most active at dawn or dusk. 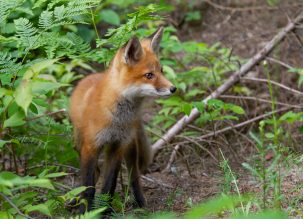 The City reminds residents not to feed foxes intentionally or to leave food or garbage out that could attract foxes. This will help reduce their presence in urban neighbourhoods.

Like coyotes, foxes are part of a healthy ecosystem that controls rodent populations.

Mississauga is home to the red fox. This type of fox is known for its reddish-orange fur, long, thin legs, medium sized-frame, pointed black tipped ears, a slender snout and a thick, white-tipped bushy tail. Their chest and belly tend to be a creamy off-white colour. Like cats, foxes use the balls of their feet to silently sneak up on their prey. Foxes also climb trees, use their whiskers to navigate and even stalk their prey similar to cats.

Foxes are omnivores, which means they eat a mix of insects, fruits and vegetables and a wide variety birds, small mammals and rodents. For the most part, foxes are opportunistic predators, meaning they will attack anything they think is easy prey. 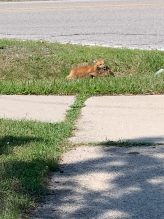 Unlike coyotes, foxes are solitary. They prefer to hunt and sleep alone except when raising their young. Like all animals, foxes are interested in an easy meal, especially during this time of year when they’re tending to their young.

Coyotes are the main predator of foxes, along with hawks, owls, dogs and humans. In habitats where coyotes are present, foxes prefer to live in close proximity to humans as a means of protection.

In Mississauga, people continue to feed or leave food outdoors for wildlife. This is a concern as feeding foxes and other wild animals can increase their presence and causes them to lose their fear of people.

Do not feed foxes and other wildlife – here’s why 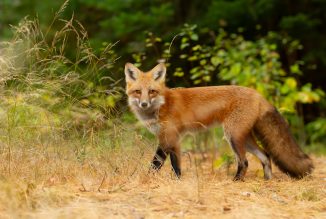 The City asks all residents not to feed wildlife, especially foxes. Most interactions with foxes have been the result of accessible food sources and intentional feeding by residents. This creates a long-term problem for both the wildlife and Mississauga neighbourhoods.

If you see foxes in your neighbourhood, remember:

Most of the time foxes are wary of people. While foxes aren’t a significant risk to people – they are wild animals and should be avoided.

If you see a fox in your yard, make loud noises, clap or shout to chase the fox away.

If there are foxes in your neighbourhood – trapping, relocating or destroying fox dens will not resolve the issue of encounters in urban areas. Capturing and relocating foxes more than a kilometre away is not permitted under Ontario’s Fish and Wildlife Conservation Act. Under this legislation, the use of body-gripping traps is illegal and poses significant risk to public safety. Implementing traps in any urban environment will pose a bigger danger to the public than the foxes themselves.

Under the City’s Animal Care and Control By-law, feeding wildlife is illegal. There is a $300 minimum fine for feeding wildlife. This includes leaving food out, food waste and disposing of food in natural areas.

Mississauga residents and visitors are encouraged to enjoy and live in harmony with wildlife by respecting their natural instincts and behaviours.

In Ontario, raccoons, foxes and skunks are the most common animals to have rabies. If you see a fox that is behaving strangely, acting aggressively, is injured or sick, please call 905-896-5858.

Learn more about foxes and other urban wildlife in Mississauga by visiting mississauga.ca/wildlife.