MiWay is participating in the hydrogen fuel cell electric bus demonstration and integration trial, which will be delivered in two phases. This trial is the only one of its kind in Canada, and will help Mississauga understand how hydrogen-electric technology can help advance the City’s commitment to a zero-emission bus fleet. 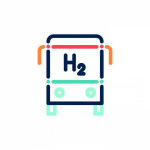 MiWay is partnering with the Canadian Urban Transit Research and Innovation Consortium (CUTRIC) on the hydrogen fuel cell electric bus demonstration and integration trial, which will be delivered in two phases.

In the first phase, a feasibility study will be completed to understand four key components in applying the technology:

The Phase 1 Feasibility Study commenced in April 2021 and is estimated to be completed in June 2022. It will deliver the lifecycle energy, emissions, and economic performance analyses of the FCEBs and fuelling infrastructure, along with a preliminary fleet electrification roadmap for MiWay based on fuel cell electric transit buses.

In the second phase, which is currently unfunded, MiWay would participate in a hydrogen fuel cell demonstration and integration trial based on the 12 year lifecycle of a typical bus, delivering service to MiWay customers in Mississauga – Canada’s sixth largest City.

As part of Phase 2, CUTRIC submitted a funding proposal to the Government of Canada in June 2021, and intends to submit the project through the Ministry of Infrastructure’s Zero Emission Bus (ZEB) Funding Program.

This demonstration project will not only inform MiWay’s ‘Road to Electrification,’ but also an investment in its second phase will kick-start the development of Canada’s first local hydrogen ecosystem in Mississauga, capitalizing on a national network of manufacturing, production, knowledge innovation, and design capabilities across the country.

MiWay, with the assistance of CUTRIC, is seeking provincial and federal government funding to support the second phase of this innovative public-private partnership to buy and operate ten hydrogen fuel cell electric buses, applying the knowledge acquired through the first phase.

By participating in this unique demonstration project, MiWay can evaluate the benefits and challenges of both technologies to plan the best road to electrification to support the City’s Climate Change Action Plan.

An initial deployment is therefore important and necessary for MiWay to examine the feasibility of introducing this low carbon technology into its fleet on a larger scale to meet the City’s climate change targets.

MiWay has learned that there are many reasons why hydrogen makes sense for Mississauga as an initial deployment.

Buses with FCEB technology are different than those powered by electric batteries in that they use hydrogen fuel cells to generate the electrical power needed to run.

Electricity is generated through an electro-chemical reaction with the fuel cell and hydrogen fuel, which powers the bus and its electricity-driven systems.

The by-product of this process is heat (water vapour), so these buses produce no tailpipe exhaust emissions. The only external infrastructure needed to support them is a hydrogen fuelling station.

Fuel cell electric buses not only generate little to no greenhouse gas emissions, but in theory, can also deliver the critical operational benefits a transit system needs to serve customers in a practical way, particularly on longer distance routes.

For example, because hydrogen fuel-cell electric buses are lighter, quieter, have more fuel capacity and can be refuelled in about the same time as a diesel bus, they don’t require large, heavy batteries that often take a long time to charge. And they don’t depend on battery charging infrastructure set up on street or in a bus storage garage.

MiWay is undertaking a Transit Electrification Study to understand battery-electric bus conversion opportunities. This study is expected to be completed in June 2022.