What's on this page:

The goal of this project is to transform the west bank of the Port Credit Harbour into a functional, aesthetically pleasing waterfront destination that allows for programmable multi-use spaces, open green space, landscape, naturalization and a continuous water’s edge promenade that incorporates the cultural heritage of Port Credit while addressing the waterfront uses of local and visiting users. 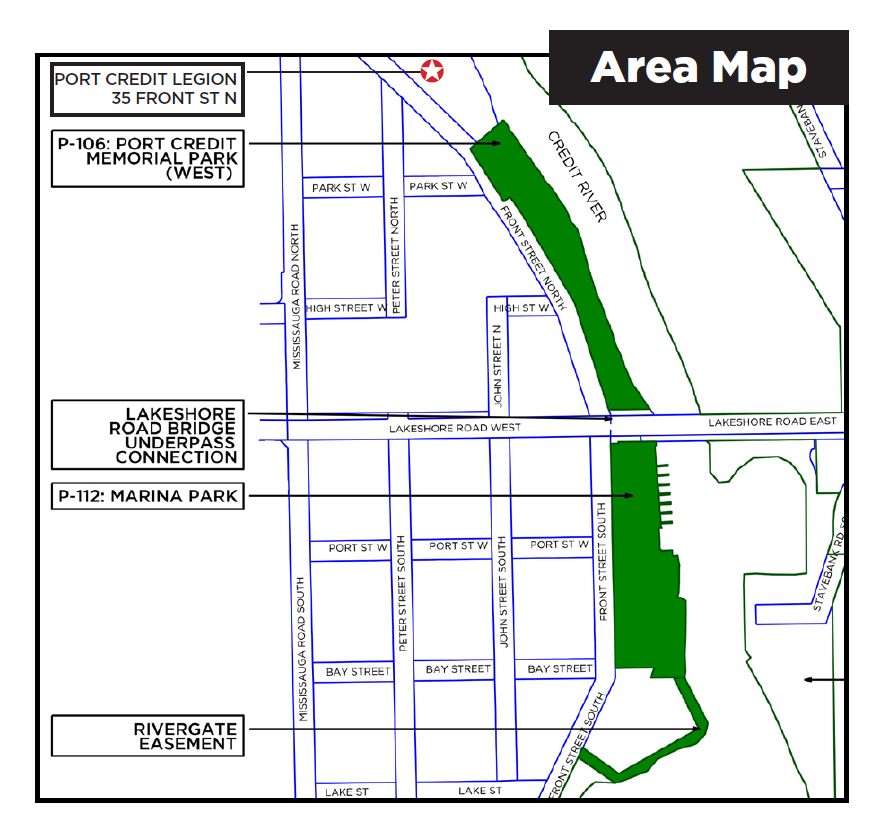 Building upon the recommendations outlined in the Waterfront Parks Strategy 2008 and Strategy Refresh in 2019, the objectives of this project are to:

The preliminary design phase in 2017/2018 is outlined in the Design Brief Report.

The City is continuing to progress on the proposed improvements to the Port Credit Harbour West Parks. Working with Dillon Consulting Ltd., this phase of the project will refine the final park concepts into detailed design and construction drawings for the project area noted above. Meanwhile, additional technical information required for detailed design is being gathered including input from recent meetings and upcoming Project Update Meeting with the community.

A public meeting was held Tuesday, March 3, 2020, at Port Credit Legion to update residents on the project.

In 2013, a Municipal Class Environmental Assessment (Class EA) was completed as outlined in the Pre-Design/Environmental Study Report which looked at alternative ways to make improvements to the Port Credit Harbour West Parks and identified mitigation to minimize potential effects. The Class EA included technical assessments of the shoreline, servicing infrastructure and natural heritage features ahead of the preliminary design phase. Consultation including two (2) Public Information Centres (PIC) was an important component of the Class EA.

In 2016, the preliminary design phase for both parks began and advanced the information found in the Class EA. In 2017, stakeholders were consulted and a public open house for the community took place. All of the information and feedback was incorporated into the Port Credit Harbour West Parks Final Concept Plan.

The design aims to balance the varying perspectives heard through the consultation including:

In 2018, the City completed the preliminary design phase and this involved agreement on the layout and conceptual design for both parks. The following design principles provide a framework for the design development and approach:

View all projects
How can we improve this site?