Today, the City of Mississauga completed the final application for the Aerial Spray Program, which began on May 23. Over six days, the City conducted two applications of the spray in affected areas that targeted fall cankerworm and gypsy moth caterpillars on both City and private property.

During this year’s program, the City sprayed more than 22 Mississauga neighbourhoods throughout six Wards. The spray area consisted of 1,940 hectares (4,794 acres) of land equivalent to roughly 1,552 football fields. 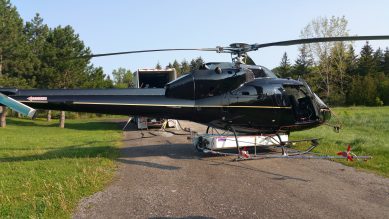 Zimmer Air has been contracted to conduct the spray on behalf of the City.

“The implementation of the spray was a success with everything going according to plan,” said Jamie Ferguson, Project Lead, Aerial Spray at the City of Mississauga. “We’re grateful that the weather conditions worked in our favour. We were able to conduct the spray in the correct timing window to ensure effective results.”

In recent years, the City has been facing an increase in fall cankerworm and gypsy moth caterpillars which impacted a large area of Mississauga’s tree canopy. Elevated levels of caterpillars caused severe defoliation of trees. This could lead to potential impacts on the overall health of many trees on both City-owned and private property. 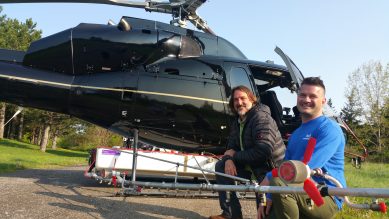 Ferguson explained, “It’s still early to know the final success of the spray program. We knew that the spray won’t eradicate all traces of fall cankerworm and gypsy moths in the city; however, it will naturally lower populations to a more manageable level. We’ve already started to see signs that the spray has had a clear effect in reducing  cankerworm and gypsy moth caterpillars in severely affected areas.”

While the aerial spray has been completed, the City will continue to implement ongoing Integrated Pest Management (IPM) measures. Over the next few weeks, the City’s Forestry staff will work with BioForest to conduct surveys on leaf defoliation on City property trees. In the fall, staff will begin to conduct egg mass inspections.

“This was the first spray the City conducted in more than 10 years, so a lot has changed from the way things were done in the past. There have been many advances in technology which really affected how we communicated to residents,” said Jodi Robillos, Acting Director, Parks and Forestry. 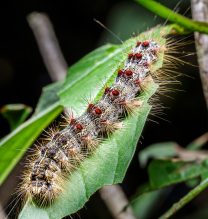 Large gypsy moth caterpillar sitting on a tree leaf that has been chewed on by the very destructive insect.

The City isn’t planning any further sprays this year.

Robillos added, “I am proud of all the hard work and effort put forward by the City’s Forestry team to make this program seamless and successful. I am also grateful for all the patience and support we received from residents living in the spray zones. The noise from the low-flying helicopters most likely wasn’t the nicest wake-up call at 5 a.m. We apologize for any inconvenience the aerial spray logistics may have caused.”

To continue ensuring that cankerworm and gypsy moth population levels stay in the normal range, residents are being asked to monitor trees on their property for egg masses. They can help by: