The City of Mississauga’s newly elected Council held its inaugural meeting tonight at the Living Arts Centre. Mayor Bonnie Crombie and the City’s 11 Council members were officially sworn in by the City Clerk for the 2018-2022 Council term.

In Mayor Crombie’s Inaugural Council address, she spoke about her future vision for the City and how working together with Council and staff she will move Mississauga forward.

“Over the next four years and well into the future, our job will be to manage our growth and further strengthen our position as a leader in the GTA and beyond.”

You have my word that as we grow, we will not change the things that make Mississauga great. We will embrace the new without losing the old; Mississauga will not lose its character,” said Mayor Crombie.

“I will continue to address the big issues facing our City including tackling gridlock and congestion, building regionally connected transit, keeping Mississauga safe, building more middle-income housing and attracting new investment to help create highly-skilled jobs in our City. We have a plan that’s working, and we are seeing it through,” added Crombie.

Highlights of that plan include:

“The people of Mississauga expect their government to deliver results. In the coming term, you have my commitment that personal politics will not impede good public policy and our collective desire to move Mississauga forward. That includes working with – not against – all levels of government, regardless of political stripe, to advance the interests of our City,” added Mayor Crombie. “Mississauga is working. Our strength is found in our people, and I am proud to say that Mississauga is stronger than ever. We will continue to be a visionary, smart city that embraces new technology, fosters innovation and grows sustainability. We will continue to ensure Mississauga remains one of the best places to live, work and raise a family for generations to come.”

You can read Mayor Crombie’s full address by visiting: mayorcrombie.ca/news.

Missed the Meeting?
An archived video of the December 3 Inaugural Council meeting can be found at mississauga.ca/councilvideos.

Mississauga
Formed in 1974, Mississauga is now recognized as Canada’s sixth largest and fastest growing major city. Mississauga has a population is 777,000 representing cultures from around the world.

Role of Mississauga Council Members
In accordance with The Municipal Act, 2001, the role of Council is: 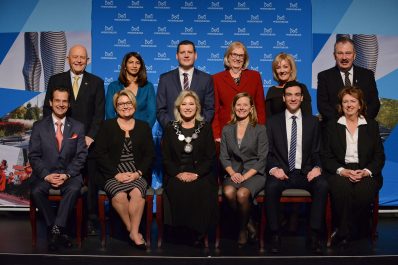 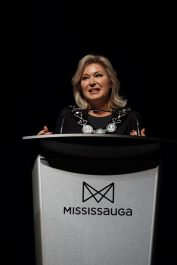