On August 29, the City of Mississauga installed a Seabin, a water waste collector, at the Credit Village Marina on a trial basis.

From dog-walkers to cyclists to boaters, Mississauga’s waterfront continues to be a favourite destination for many residents. On August 29, the City of Mississauga installed a Seabin, a water waste collector, at the Credit Village Marina on a trial basis.

“We work hard to ensure our marinas, parks and natural areas are kept clean. Given increased concern over plastics and other contaminants in the water, this device allows us to collect and dispose of waste in our marina in a way that is efficient and safe for staff,” said Jodi Robillos, Director, Parks, Forestry & Environment.

“Not only does the waste collector help to restore the overall cleanliness of the water, but it also provides us with a great opportunity to educate boaters and residents about the importance of keeping plastic and waste out of our lakes and waterways.”

The waste collector is bolted to the dock at the south-east corner of the marina. It continuously sucks in water from the lake’s surface to catch any debris, including cigarette butts, micro-plastics and spilled oil and fuel. According to the Seabin Project, the device can hold 20 kilograms of debris and can catch one ton of debris per year.

Robillos added, “This innovative device does not have a negative impact on marine animals and wildlife. In the situation where a fish ends up in the Seabin’s catch basin, it will not be harmed in the underwater filter and can easily be returned to the lake.”

The device will be operational during regular marina hours, with City staff monitoring the device daily and recording the kind of debris that is collected.

Both of the City’s marinas, Credit Village Marina and Lakefront Promenade Marina, have previously received a five star anchor rating for environmental practices.

To learn more about the City’s ongoing commitment to maintaining its marinas, parks and natural areas, follow Mississauga Parks and Forestry on Twitter (@MississaugaPF) or visit mississauga.ca/parks. 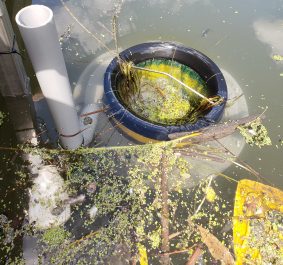