The Mississauga Urban Design Awards has celebrated and recognized the excellence in architecture of our city, old and new, for more than 40 years.

In each Awards program, the City calls for submissions, which a jury evaluates based on a citywide and community scale, living green, innovation, context, execution and healthy development elements. Whether submissions win an award or not, each project goes to develop our community and helps to bring us to where Mississauga is today.

As we come up to the announcement of the 2023 awards, we thought we would take the opportunity to recognize a few unique winners that focused on community building in the Lakeshore area. 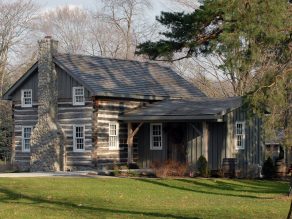 The Log Cabin was rebuilt in 2007, but the components of its structure date back far before that. The cabin, originally built in the mid-19th century, was moved to Port Credit in 1967 as the local Rover Crew’s Centennial Project. It was used by the Rovers and the 4th Port Credit Scouts for many years, but unfortunately fell into disrepair. In 2002, the Friends of the Museums of Mississauga’s Log Cabin Task Force saved the building from demolition as they completed fundraising and planning which saw the cabin relocated to the Bradley Museum site. The Log Cabin opened to the public in December 2007.

The relocated building was recognized with an Award of Excellence in 2008. Jurors noted the project’s significance in demonstrating civic pride, and community ownership, while highlighting sustainability in reusing materials. It is thanks to a grand community effort that we can continue to enjoy this historic space together. 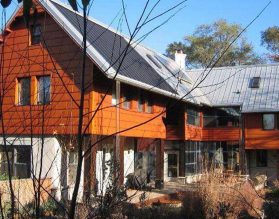 The Straw Bale House is unique as it is interesting. As you may have guessed from its name, straw was used in its construction! With concrete and wood foundation, the walls of the first floor are made from straw covered in stucco – the straw was selected for its low toxicity and high insulating properties. The home embodies a sense of community, as it was designed for co-habitation with three suites and a common gathering area, and it was built with the help of community volunteers!

This building won an Award of Merit during the 2007 Mississauga Urban Design Awards, credited for its innovation, creativity and environmental stewardship. Beyond the straw, the site is naturalized with sustainable ground covers and native materials. The roof adds to the environmental stewardship as well; a green roof covers the carport, and rainwater leaders channel storm water to landscape areas around the property.

The Straw Bale House is located at 977 Meadow Wood Road. While it continues to serve as a residential property, it is definitely worth a drive by to have a look! 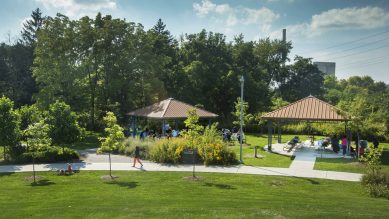 Nothing says community like public outdoor spaces – and the lake views are an added bonus. Lakeside Park offers Mississaugans a place to enjoy being outside year round. With picnic areas, playground, spray pad, and off-leash dog park, this park offers a great way to celebrate nature and connect with our neighbours.

Lakeside Park won an Award of Excellence in the 2013 Mississauga Urban Design Awards. Jurors commended the park’s layout, noting the design both draws visitors to the centre of the park space while also taking advantage of beautiful vistas and lookout points. Kudos were also given to inherent safety features, and interactive elements connecting features within the park.

Visit our website to plan your visit to Lakeside Park, located at 2268 Lakeshore Road West.

The Mississauga Urban Design Awards illustrate the City’s ongoing desire to inspire, develop and celebrate design leaders who help raise the quality of life for residents, and shape the image of Mississauga. The program, which began in 1981, is the longest-running awards program of its kind in Ontario.

More information about the program is available on the Mississauga website.