Today at General Committee, Mayor Bonnie Crombie and Members of Council paid tribute to the City’s remarkable former Mayor, Hazel McCallion, just days ahead of her 100th birthday on February 14. This centennial celebration of McCallion, and her legacy as Mississauga’s longest-serving Mayor, also included video greetings from Prime Minister Justin Trudeau and other notable public figures.

“The City of Mississauga owes a great deal of gratitude for the decades of public service that Hazel has proudly and tirelessly provided the residents of this great city,” said Mayor Bonnie Crombie. “She is a source of inspiration for all of us and is an exemplary role model to women in politics, myself included. I am thrilled that we are able to celebrate this significant milestone of her 100th birthday and am proud that we are renaming our Central Library to ‘Hazel McCallion Central Library’ in her honour. It’s a great day for Hazel and a great day for all Mississauga residents.”

“It was a privilege to witness the evolution of Mississauga under Hazel’s impassioned leadership during her 36 years in office,” said Paul Mitcham, City Manager and Chief Administrative Officer. “Having worked for a number of those years alongside Hazel, I can attest to her unwavering drive to serve the people of Mississauga, and her ongoing support for the success of our City employees. ‘Work hard and do your homework,’ she is known to say, so, Hazel, here we are working hard to propel Mississauga forward along the path to success that you started us out on.”

On November 25, 2020, Council approved the renaming of Central Library to “Hazel McCallion Central Library.” The renaming is not the only change planned for the building. The Central Library will close on March 20, 2021, to undergo a major renovation to modernize the space, provide new programs and services and help residents get better connected and engaged with the library. Construction will start in April 2021 and the library will reopen in 2023.

“Just as former Mayor McCallion helped transform Mississauga from rural beginnings to Ontario’s third-largest city, the Central Library is undergoing a transformation of its own,” said Shari Lichterman, Commissioner, Community Services. “It is very fitting that the Hazel McCallion Central Library will bear her name.”

In addition to this morning’s festivities, Mississauga’s Civic Centre Clock Tower will be lit red and pink on February 14 in recognition of Hazel McCallion Day. A private member’s bill was passed by Members of Provincial Parliament in December 2016 to designate this special day annually in Ontario.

Celebrations do not stop there. Residents can purchase a commemorative photo book, Hazel McCallion: A Century of Accomplishment, on McCallion’s 100th birthday on February 14. With 100 per cent of proceeds going to Trillium Health Partners, the book has already raised more than $2.5 million. The hardcover book explores her life and accomplishments over the years through captivating photos over time. McCallion is also Trillium Health Partner’s Honourary Guardian. For more information on the photo book, please visit Hazel100.ca. 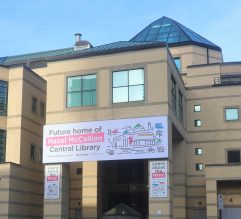