As part of its commitment to strengthening relationships with Indigenous neighbours and partners through action, the City of Mississauga will officially raise the Every Child Matters flag, which will fly at the Mississauga Civic Centre on a permanent basis.

“This is more than the raising of a very important flag – it’s a symbol of Mississauga’s commitment to never forget the Indigenous lives that were lost at former residential school across Canada,” said Mayor Bonnie Crombie. “It strengthens our resolve to do more for the Indigenous communities that have shaped Canada’s history.”

According to the National Centre for Truth and Reconciliation, for a period of more than 150 years, First Nations, Inuit and Métis Nation children were taken from their families and communities to attend schools which were often located far from their homes. More than 150,000 children attended what were called Indian Residential Schools.

“The residential school system was one of the darkest chapter in Canadian history, and it’s so important that every resident makes efforts to truly understand the suffering that was experienced and continues to be felt today by survivors and their families,” added Mayor Crombie. “Raising the Every Child Matters flag is a reminder of those children who never made it home. We are forever grateful to the survivors who continue to share their stories today.”

“On behalf of the Mississaugas of the Credit First Nation (MCFN) Chief and Council, we are proud to join the City of Mississauga as they raise the Every Child Matters flag. This is to honour and respect the Indigenous children who attended residential schools, and offer love and support to their families,” said Chief R. Stacey Laforme, MCFN. “It is important we stand united, for these are not Indigenous children, they are all our children, the children of this land. We must never forget this moment in time. In their memory, we will do better, we will be better.”

As part of the City’s ongoing work, in November 2021, Mississauga Council approved the recommendations in the City’s Annual Reconciliation Report and Land Acknowledgement Renewal. This is an important step in the work towards reconciliation and strengthening Mississauga’s commitment to Indigenous Peoples and communities.

To learn more about the City’s commitment to building and evolving relations with Indigenous Peoples and communities in Mississauga, read the Annual Reconciliation Report and Land Acknowledgement Renewal and visit mississauga.ca.

What: Raising of the Every Child Matters flag

During the Council meeting, Gimma Stacey Laforme will make a deputation followed by remarks by Mayor Crombie before making their way outside for the flag raising. The live deputation can be viewed here on February 16.

The flag raising will be livestreamed on February 16 and can be accessed by clicking here. 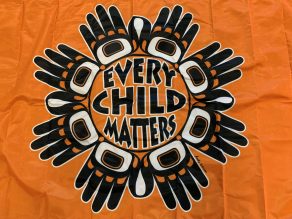