The City of Mississauga has been awarded the International Organization for Standardization 37120 (ISO 37120) platinum-level certification from the World Council on City Data (WCCD) – a global leader in standardized city data. Mississauga is one of ten Canadian municipalities to receive the certification. The City joins more than 60 municipalities that are part of the WCCD global network.

“We are pleased to be recognized with this honour alongside other world-leaders including London, Dubai and Buenos Aires,” said Mayor Bonnie Crombie. “Increasing transparency and fostering innovation are important priorities for us as we continue to create a connected city for the 21st century. Data-driven decision making is vital for us to deliver high-quality programs and services to our citizens.”

Mississauga reported 96 out of the 100 indicators, earning platinum-level ranking.

“Mississauga is now part of an international standard,” said Janice Baker, City Manager and Chief Administrative Officer. “Not only does it show how we are doing compared to other cities, but also serves as a benchmark in our planning process. It is important for us to be able to learn from other cities as we continue to build a world-class city.”

The standard includes a comprehensive set of 100 indicators that measures a city’s social, economic and environmental performance. The Region of Peel, local school boards, utilities and Trillium Hospital contributed data as part of the assessment.

Data now shows that Mississauga is currently ranked one of the top 10 cities in the world and the top city in Canada with the highest number of businesses per 100,000 population.

The City’s data was reviewed by an independent third-party as part of the process. This ensures that all of the data is consistent.

“On behalf of the WCCD, it is a pleasure to welcome Mississauga to our global network of data-driven cities,” stated WCCD President & CEO, Dr. Patricia McCarney. “Under the leadership of Mayor Crombie, and through the efforts of her team, Mississauga is now WCCD ISO 37120 certified at the highest, Platinum level, joining a group of cities that includes London, Dubai, Los Angeles, Buenos Aires, Quebec City, Surrey and Toronto, amongst others. Harnessing this high caliber, globally standardized and independently verified city data will help to continue to showcase Mississauga locally, nationally and globally as an innovative and attractive place in which to live, work and play.”

In May 2014, the ISO published Indicators for City Services and Quality of Life, the first international standard on city data. This new international standard was developed using the framework of the Global City Indicators Facility that has been extensively tested by more than 250 cities worldwide. This is a demand-led standard, driven and created by cities, for cities. ISO 37120 defines and establishes definitions and methodologies for a set of indicators to measure the performance of city services and quality of life.

Starting with 20 foundation cities like Shanghai, London, Boston and Los Angeles, the WCCD is a growing a global network of more than 60 cities in 34 countries. 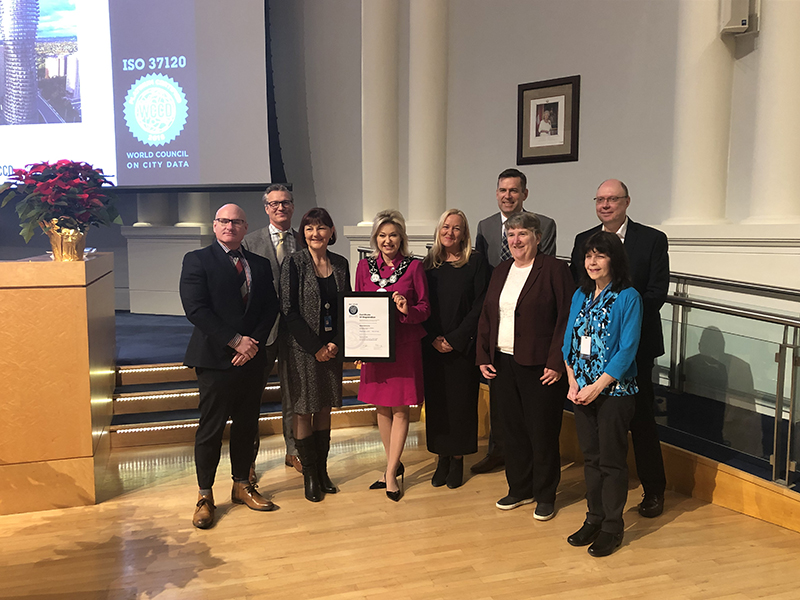