Speed Cameras are Working and Drivers are Slowing Down

From August to December 2021, the City activated Automated Speed Enforcement (ASE) cameras on 12 streets throughout Mississauga. ASE uses a camera and a speed measurement device to help enforce speed limits in school area community safety zones. The data shows that drivers are slowing down and following the speed limit. The average reduction in speed is more than 7 km/h and there has been an average increase of 22 per cent in driver compliance with the speed limit. The cameras are working.

“What’s clear from this data is that our speed cameras are having a significant effect in changing the behaviour of many drivers on our roads. But the data also shows that too many people are still speeding, and it’s particularly concerning that this is happening in areas around schools and in community safety zones,” said Mayor Bonnie Crombie. “As a Vision Zero city, we are committed to doing everything we can to make our roads safer for all users. That means using tools like speed cameras and looking for opportunities to expand the program, while also aggressively implementing other road safety measures that are part of our Vision Zero Action Plan.”

All cameras are placed in 30 km/h school area community safety zones and are rotated to different school areas where speeding has proven to be a consistent problem. From August to December 2021, there were a total of 4,827 tickets for speeding (5,322 total tickets issued since the start of the program in July 2021). There were 451 repeat offenders with the most ticketed vehicle accumulating eight tickets. Based on the data, the ASE camera on Colonial Drive issued the most tickets. There was an upswing in the number of tickets issued in September as students returned to school. The most tickets issued were in December likely due to more cameras operating during that time.

“It was surprising to see the number of repeat offenders and drivers speeding more than twice the posted speed limit in school zones where there are students and children present. So far, we’ve seen a significant drop in speeding and increased compliance in areas with an Automated Speed Enforcement (ASE) camera. The ASE program aims to increase road safety, reduce speeding and raise public awareness about the need to slow down and obey posted speed limits. This shows the effectiveness of the ASE program in getting drivers to slow down,” said Geoff Wright, Commissioner, Transportation and Works. “We know that reduced speeds lower the risk of a collision and lower the severity of injuries for vulnerable road users.”

The ASE program is one of the 99 tools within the City’s Vision Zero Action Plan to help Mississauga reach its Vision Zero goal of zero fatal and serious collisions on the road network. In addition to the ASE cameras, the City has implemented several traffic calming measures, lowered speed limits in neighbourhood streets and school zones and is updating more than 800 pedestrian signals this year to provide more time to cross the street.

A fulsome report is planned for later this year. It will include data and updates from all ASE locations from the expanded program.

When an ASE ticket is issued, you will receive the ticket by mail. It includes a set fine, determined by Schedule D under the Provincial Offences Act. The total ticket amount includes the set fine, applicable court costs and a victim fine surcharge. Tickets do not incur any demerit points and do not affect a person’s driving record. Drivers caught travelling more than 50 km/h over the limit are summoned to court.

More information about ASE data from August to December 2021.

More information about the ASE program including a map of all active and future camera locations can be found at mississauga.ca/ase. 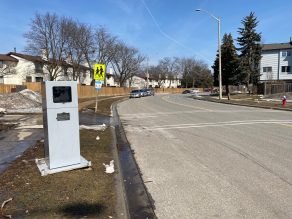