“On the fifth anniversary of the Hickory Drive home explosion, I want to once again thank Mississauga Fire and Emergency Services and all the first responders who arrived on scene within minutes of the explosion, as well as staff from the City and its agencies who worked to restore the community in the days, weeks and even years that followed,” said Mayor Bonnie Crombie. “This incident on Hickory Drive shook our entire community. Dozens of residents suffered injuries that day and many were uprooted from their homes and took years to rebuild. I am continuously amazed at the resiliency and strength of our community.”

The explosion of 4201 Hickory Drive was the result of natural gas inside the home. The Office of the Fire Marshall of Ontario determined that there were two natural gas supply lines that were intentionally disconnected from the water heater within the residence. Two people were killed that day both of whom lived within the residence on Hickory Drive which was the source of the explosion. Thirty-seven homes near or adjacent to 4201 had building-code orders placed on them; four were later demolished.

”The collaborative response of partner and community agencies that day and in the years to follow was outstanding and serves as a best practice for other municipalities,” said Deryn Rizzi, Mississauga Fire Chief and Director of Emergency Management. “Thankfully, incidents of this magnitude do not occur frequently but it is important to remember, learn and continue to be prepared as best as possible. Let this day serve as a reminder to review fire safety with your family including making an emergency plan and building an emergency kit.”

In its pure state, natural gas is odourless, however an odourant is added to give it a distinctive smell.

Signs of a natural gas leaks include:

If you suspect a natural gas leak act quickly and remain calm. Go outside or leave the area immediately and call the 24-hour emergency number

Find out how to prepare for an emergency or disaster, including building an emergency kit and special considerations for children, pets, older adults, and people with disabilities by visiting mississauga.ca/emergencymanagement. 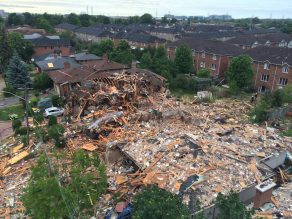