Structures have been built to provide nesting habitats for this threatened bird species in two City parks.

Barn Swallows have been listed as a threatened species by the Province of Ontario.

Historically, these birds would nest in caves, but they have adapted to inhabit human-built structures like barns. A decrease in the number of barns for nesting and fields for feeding on insects has resulted in the decline of this species. 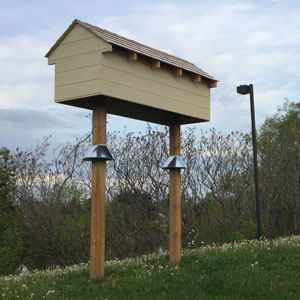 The Barn Swallow is a medium-sized bird (15-18 cm long). Males have a glossy blue back and upper wings, rusty-red forehead and throat, and a tawny underbelly, with long tail feathers that form a distinctive fork. Females are similar in appearance but with duller colours and a shorter tail.

Barn Swallows belong to the aerial insectivore group, which means they eat insects “on-the-wing” or in flight. They are important in nature as they help to control insect populations, such as mosquitoes.

Structures such as the one on the right above have been built to provide nesting habitats for Barn Swallows. You can find these structures at Lakefront Promenade and R.K. McMillan Park.