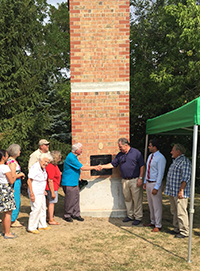 Apprentices at the Ontario Masonry Training Centre in Mississauga built two 18 foot towers. The Cement Association of Canada donated cement for the foundation, Forterra Brick donated the bricks for the tower, and Harris Rebar provided rebar.

The Chimney Swift is a small bird, with a sooty brown, cigar-shaped body, long slender wings and a lighter throat. It can be distinguished by its acrobatic flight pattern. They are found in urban areas and nest in chimneys and other manmade structures. The Chimney Swift breeds in eastern North America. The Chimney Swift is a threatened species and its’ population has decreased due to a decline in its prey and loss in habitat.