The Missing Link is a proposed new railway line that would transform the way people and goods move across Mississauga, the Greater Toronto and Hamilton Area and Waterloo Region.

The Ontario Provincial Government has announced a policy of providing two-way, all-day service on existing GO Transit rail lines. For the Milton and Kitchener lines, this is prevented by the presence of heavy through freight rail traffic.

The Missing Link is a package of rail improvements that would allow for substantially expanded two-way, all-day service on the Milton and Kitchener GO Transit lines by relocating heavy freight rail elsewhere. 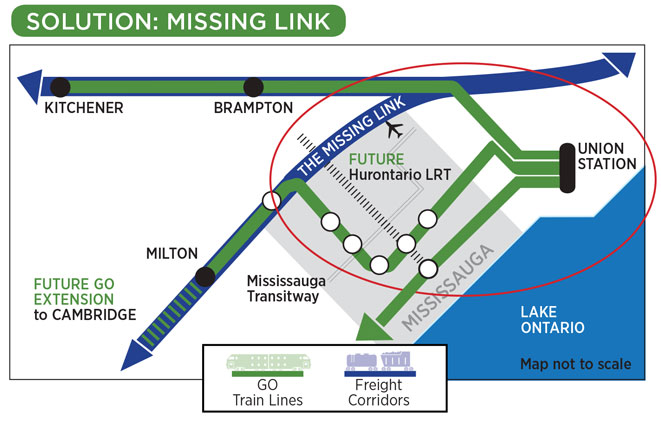 The Missing Link would run between the Milton GO line west of Trafalgar Road in Milton and the CN Bypass Line at Bramalea via the Parkway Belt adjacent to Highway 407.

The need for two-way, all day GO service on the Milton and Kitchener GO lines is supported through multiple planning, infrastructure and transit programs. One of the largest is the Metrolinx Regional Express Rail initiative. It responds to growing traffic congestion and growing demand for GO service and ridership, all of which is necessary to support the economies of Mississauga, the Greater Toronto Hamilton Area (GTHA) and Waterloo Region.

The Missing Link is an alternative to widening the Milton and Kitchener GO Transit rail lines that would unlock two-way, all-day GO service and bring long-lasting benefits to Mississauga.

The Milton GO Rail corridor is a critical element in Mississauga’s rapid transit network and the second busiest by ridership in GO Transit’s rail network after the Lakeshore line, yet service on this line is presently limited to peak-direction service during peak hours.

This line’s importance will continue to grow as future connections are planned at Cooksville GO with the Hurontario LRT and Mississauga’s Downtown, as well as connections to the rapidly growing Meadowvale Business Park.

The benefits of the Missing Link include: