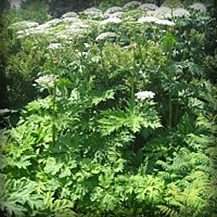 Giant hogweed is a plant from southwest Asia. It’s been present in Mississauga since 2011.

The plant is toxic to humans.

How to spot an infestation

The plant can reach up to 6 metres (19 feet) when flowering. The stock is thick, hollow and purple-spotted with coarse, white bristles. It has large leaves and will produce small white flowers, usually between July and August.

The City controls and monitors Giant Hogweed populations. In Mississauga, it’s mostly found along the Credit River and connecting creeks.

In 2011, the City started pesticide applications to eradicate the plant. This has successfully reduced the amount of Giant Hogweed and will continue until the spread of this plant is controlled.