Heading to work? Going on a business trip or on vacation? MiWay’s Route 100 – Airport Express is now operating every 16 minutes, Monday to Friday, along the city’s dedicated bus-only Mississauga Transitway.

MiWay riders can travel between 4 a.m. and 7 p.m. from Winston Churchill Station to Renforth Station and express to Toronto Pearson International Airport Terminals 1 and 3. Route 100 stops at all 12 transitway stations and offers connections to the Toronto Transit Commission (TTC), GO Transit bus service and Brampton Transit.

“This new route offers a quick, efficient and more affordable way for residents, visitors and thousands of airport employees to get to and from Toronto Pearson International Airport,”

said Mayor Crombie. “It is also good for business because it makes it easier for international companies such as Bayer Inc. and Morguard to move employees from the airport to their offices in Mississauga. By strengthening regionally connected transit, we are helping create jobs and grow our economy.”

Route 100 – Airport Express, was made possible in part from the Public Transit Infrastructure Funding program – an equal cost sharing funding program in which the City of Mississauga and the Government of Canada each contributed $58 million. The joint funding program is helping the City deliver service improvements that include the purchase of 13 new buses, 80 replacement buses and the rehabilitation of more than 280 buses, enabling the launch of new services and service improvements to existing routes along key commuter corridors including:

“Mississauga residents now have better transit options to access the Toronto Pearson International Airport,” said Minister Bains. “Our government is helping create a new route that will serve the growing needs of riders in Mississauga, whether they travel for work or pleasure.”

“We congratulate the City of Mississauga on the launch of the Route 100 – Airport Express service, which will improve transit connectivity to Mississauga for our passengers and employees. Mississauga is home to more than 13,000 airport employees and many global businesses that rely on timely access to the airport,” said Howard Eng. “We look forward to continuing to work with the City and other surrounding municipalities to enhance Toronto Pearson’s regional transit connectivity as we work towards our vision of serving as the Greater Toronto and Hamilton Area’s second major transit hub.”

Route 100 will serve customers in Mississauga’s downtown core and in the Mississauga Airport Corporate Centre. These stops target Mississauga businesses, offering them an efficient way to travel to the airport.

“As a global organization, we frequently travel and welcome a great deal of guests through Toronto’s Pearson International Airport,” said Alok Kanti. “We are pleased to see that this expansion has been completed as it will lead to improved accessibility for our employees and those that we do business with.”

“Morguard owns and manages an extensive portfolio of commercial real estate, with properties and team members located across North America,” said Tullio Capulli. “Having a direct transit line between the airport and the Mississauga core, where our head office is located, is a great option for our tenants and our employees.”

Plan your MiWay trip on Route 100 – Airport Express by visiting miway.ca/planatrip or by calling 905-615-INFO (4636) for customized route and schedule information. 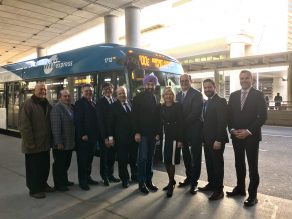 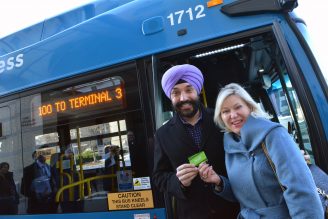