The City of Mississauga announced today that the Nav Bhatia Superfan Foundation is contributing $150,000 to the redevelopment of four basketball courts, as well as on-going programming at Malton’s Paul Coffey Park located in Ward 5.

“We know that sport has the unique ability to inspire and unite people from diverse backgrounds. It’s so much more than a game; it injects excitement, enthusiasm and builds a sense of community. That was never more evident than when Mississauga hosted tens of thousands of fans to Jurassic Park West to cheer on the Raptors during the NBA finals, officially cementing our City’s reputation as a hotbed for basketball,” said Mayor Crombie. “I want to personally thank Nav and his Foundation for continuing to invest in our City and for finding ways to engage our youth through community-based sports projects. Great cities are shaped by the people who live and work here and who are invested in making it a better place. I want to thank Councillor Parrish for her advocacy efforts; this wouldn’t be possible without her. These new courts will have long-lasting impacts on the Malton community and will help grow and shape sports in our city for decades to come.”

“Paul Coffey Park is undergoing a complete transformation. The new basketball courts, sports fields and amenities will create a fresh vibrancy,” said Ward 5 Councillor Carolyn Parrish. “I am very thankful to Mississauga’s own Raptors’ Superfan, Nav Bhatia, for this generous investment into his first Canadian community. He can always be counted on. His ongoing support will help provide a positive outlet for children in the neighborhood. The new basketball courts will give youth in the area access to a safe space to learn, play and thrive while having fun.”

In addition to the basketball courts, the Foundation has committed to provide on-going programming for the courts through its annual Superfan Summer Tournaments and other Nav Bhatia Superfan Foundation events.

“As a valued asset to the Malton community, the redevelopment of Paul Coffey Park will enhance the design quality, social and environmental attributes to meet current and future user needs,” said Jodi Robillos, Director, Parks, Forestry and Environment. “In addition to the basketball courts, phase one of the park redevelopment includes a relocation of the tennis court, bocce court reconstruction, an addition of a leash-free zone and cricket pitch upgrades.”

Phase one construction is scheduled to begin in spring 2020. For more information about the Paul Coffey Park Master Plan, visit mississauga.ca/paulcoffeypark.

Paul Coffey Park is a multi-faceted community park that stretches 45.5 hectares (112.4 acres) through Malton. It is a well-attended park used by residents, sports and cultural groups. The redevelopment of Paul Coffey Park was a recommendation from the Future Directions Parks & Forestry Master Plan and builds on integrating existing assets such as Paul Coffey Arena, the new Malton Adventure playground and the recently renovated CF100 aircraft. 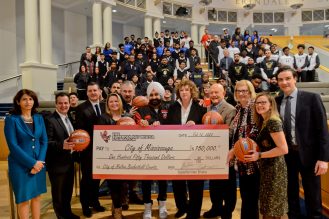 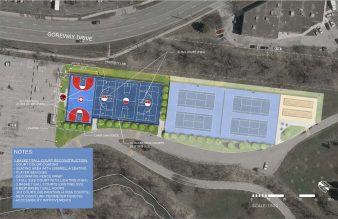