The City of Mississauga has partnered with Peel Regional Police on the road safety program called #TakeThePledgePeel, after it was endorsed by Council and the City’s Road Safety Committee. The program encourages all road users (drivers, cyclists, pedestrians – walking or rolling) to do their part to keep themselves and other road users safe. The campaign addresses three concerns on Mississauga roads:

The #TakeThePledgePeel program advocates for drivers to slow down and encourages other road users to be aware of their surroundings on the roads.

The pledge can be made by any road user:

It’s important for all road users in Mississauga to be aware of their surroundings and extra vigilant around school zones, intersections, crosswalks and public transit stops.

Awareness of speeding is an important aspect of the Road Safety Committee’s 2020 goal to develop awareness and educate Mississauga residents about road safety initiatives, programs and issues.

Speeding is a serious problem on Mississauga roads. It’s a contributing factor in approximately one-third of fatal collisions in Canada. The #TakeThePledgePeel campaign aligns with the City’s work of taking action to effectively implement Vision Zero principles into its road safety initiatives and efforts to keep all road users safe, and reduce injuries and collisions on Mississauga roadways. The City is increasing its efforts to make Mississauga roads safer for everyone by lowering speed limits and installing traffic calming measures to address speeding, make improvements to infrastructure and use data to make informed decisions.

To sign up to take the pledge, visit https://forms.peelpolice.ca/Campaign-Forms/Take-The-Pledge-Peel. 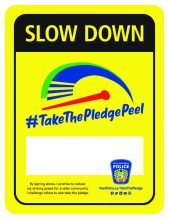