Winter may officially be only three months long, but snowfall and cold temperatures can last much longer. Here are some things to keep in mind when clearing snow from your property: 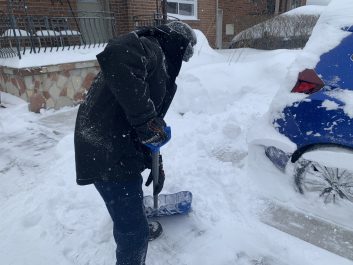 Shovel early and often
Shovel early and often to keep walkways clear and limit heavy snow build up. Shovelling periodically during a storm can make heavy snow or significant accumulation easier to clear. Prevent an icy stoop by shovelling snow off it right after a storm, before the snow has a chance to melt and turn into ice. Remember to clear sidewalks that are connected to pathways close to your residence.

Take a break
Shovelling can be an exerting task – remember not to overexert yourself. Take breaks, stay hydrated, make sure to dress appropriately and stay warm.

Avoid an icy driveway
After the snow is removed from your walkway, sidewalk and driveway, be sure to check if de-icing is necessary. Use salt wisely to minimize the impact of salt on the environment by following manufacturer instructions to apply the right amount, under the right conditions.

Park vehicles in your driveway
After clearing snow from your driveway, avoid keeping your vehicle parked on the street so City plows can clear roads safely and more efficiently.

Windrows
A windrow is the pile of snow left at the bottom of a driveway after a plow clears the road. Remember, it’s the homeowner’s responsibility to clear the windrows and remove the snow from their own driveways. Those who applied for the City’s Windrow Program will have a three-metre space in the windrows cleared by the City, which can take up to 36 hours after the end of a snowstorm.

Check your driveway for cracks
Freezing temperatures can cause pavement to chip as water gets inside and freezes. Fill cracks and/or holes. Also seal hard surfaces to prevent water from getting into them. Resolve any drainage issues on your property to prevent ice from forming.

Be a good neighbour
Help keep your community safe by clearing your sidewalk of snow and ice as soon as possible after a snowfall ends. You can also offer to help your neighbours, especially older adults and people with disabilities, by offering to shovel their walkway, sidewalk and driveway.