Check out a few of Mississauga’s historic neighbourhoods and landmarks.

Since the City of Mississauga was incorporated in 1974, it has grown to become Canada’s sixth largest city. Mississauga grew from several historic villages, with some disappearing over time and others continuing to exist today. Each neighbourhood is steeped in historical significance and provides endless opportunity for discovery. Check out a few of Mississauga’s historic neighbourhoods and landmarks. 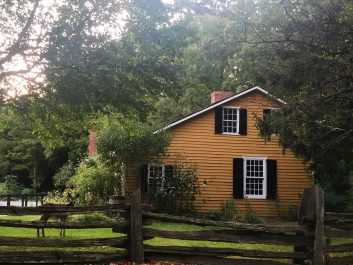 Many consider Clarkson to be Mississauga’s first settled area, with settlement in Clarkson beginning as early as 1807. Clarkson is also home to two heritage houses that are open to the public: Bradley House and Benares Historic House.

Bradley Museum
Located within a 70-year-old maple grove, the Bradley Museum Complex consists of four buildings, three of which are designated Ontario Heritage Sites. The Bradley House itself was built in 1830 and continues to stand on the original property owned by the Bradley family.

Until November 17, check out the Mississauga Miracle Exhibition at the Bradley Museum to see archives and artifacts from the 1979 Mississauga Train Derailment.

Benares Historic House
Home to four generations of the Harris family, the Benares Historic House was originally built in 1835. It currently houses the impressive Harris Family collection, with more than 95 per cent of the artifacts in the house being original to the family and home.

Visit the Bradley Museum and Benares Historic House from Thursday to Sunday from noon to 4 p.m.

With settlement beginning around 1819, Mississauga’s ‘Village in the City’ became a bustling centre for political and economic activity. Today, Streetsville is home to Mississauga’s largest collection of historic buildings, including the Leslie Log House, as well as two City-owned, historic cemeteries.

Leslie Log House
Designated under the Ontario Heritage Act, the Leslie Log House is home to the Streetsville Historical Society and Archive. The house maintains its original structure and provides a rare example of log construction from the early nineteenth century.

Visit the house on Wednesdays and Sundays from 1 to 4 p.m.

Cemeteries
The Streetsville Memorial Cemetery is a local landmark and an integral part of the Streetsville community. With burials beginning in 1824, the cemetery is rich in history. The land was provided to the Presbyterian Church by Timothy Street, after whom Streetsville was named.