Explore the history of the public engagement process for the Inspiration Lakeview Master Plan, including community meetings, presentations and photos.

The evening began with opening remarks by Susan Burt, Director of Strategic Community Initiatives and was followed by a video summarizing the public engagement throughout the master planning process. Pino Di Mascio, a Partner at Urban Strategies Inc., presented the Master Plan, which incorporated the comments received from the public at the last community update on May 15, 2014. Scott Martin, Senior Vice President of Business and Administrative Services at Ontario Power Generation and Rick Jennings, Assistant Deputy Minister of Energy, Supply Policy Division from the Ministry of Energy expressed their support for the Inspiration Lakeview project. Closing remarks were provided by Councillor Jim Tovey.

If you did not have the opportunity to attend the June 23, 2014 PDC meeting, please feel free to review the material provided below. The Master Plan was circulated by the City for review by the public, partner organizations, agencies, and governments over the summer and fall of 2014. We thank you for all of the input we received on the Inspiration Lakeview Master Plan. All comments are being taken into consideration as we move forward with the next steps.

The evening began with an open house, opening remarks by Honourable Minister Charles Sousa, Councillor Jim Tovey, the Senior Vice President Business and Administrative Services at Ontario Power Generation Scott Martin and Strategic Leader Lorenzo Ruffini. Pino Di Mascio, a Partner at Urban Strategies Inc., presented the proposed Master Plan framework which was followed by a guided community workshop. If you did not have an opportunity to attend please feel free to review the material provided below and provide comments back to the Inspiration Lakeview Team by March 25, 2014. The Inspiration Lakeview Team is looking forward to hearing your thoughts.

The Inspiration Lakeview team gathered with community members to provide updates on work underway and next steps. The City of Mississauga, the Province of Ontario and Ontario Power Generation are working together with the community to develop a shared vision and Master Plan for the Inspiration Lakeview study area. The next steps will be focussing on the Master Plan Framework.

Over three days in December 2010, a local seniors’ community centre was transformed into “idea central” as almost 500 community members shared their ideas about a new Mississauga waterfront in the Lakeview area.

They arrived in groups of two or three. Some arrived alone but found their neighbours among the crowd. They came not only be to be inspired but also to provide the inspiration – ideas, dreams and thoughts with many sentences beginning with, “What if…” for the Mississauga waterfront in the Lakeview area.

It took three full days plus a kick-off event, partnered with discussions with residents, consultants, seniors, families and youth – lead by world-class planners, Urban Strategies Inc. and City of Mississauga staff, to craft the start of a vision for the waterfront.

Crafting the vision together

Whether sketching new landscape design options with colourful markers or discussing all the angles with the consultants and staff or writing down ideas and placing them on postcards and sticky notes on massive boards, hundreds of residents came out in droves over three days in early December.

Their ideas were interpreted and transported to a huge model while two model makers transformed people’s ideas into water features, gardens, buildings and open-concept structures.

Among those turning out to share their thoughts about the waterfront were Member of Provincial Parliament Charles Sousa, Mayor Hazel McCallion and Councillors Chris Fonseca, Pat Mullin, Ron Starr, and Jim Tovey. They each took the opportunity to ‘get behind the waterfront’ and were excited to see how the vision for the Lakeview area waterfront connects to the overall vision of the City of Mississauga’s strategic plan.

Dream it, green it then build it

On the third day of the visioning sessions, Urban Strategies Inc. began to pull together thousands of ideas over a mere few months of the highly-engaged residents and stakeholders.

The conversations and energy flowed from room-to-room as each discussion led to another thought of, “You know what we could do?” or “I’m thinking this…” Then the on-going buzz of conversations led to one round-table discussion after another.

The Ontario Power Generation (OPG) lands were opened up for a public tour – an up close look at an area that has been closed off to the community for decades. November also saw City of Mississauga staff join 350+ secondary students to gather youth oriented ideas and perspective on the potential for the waterfront development in Lakeview.

Closed off to the community for decades, the Ontario Power Generation (OPG) lands were open for public viewing for the first time for many – one blustery day in November aboard a new MiWay Mississauga transit bus.

Seeing the lake up close

The tour was led by Bob Osborne, Director of Public Relations for OPG and landmarks included the water channels, the concrete pad that was the site of the power generation station and the “Four Sisters” stacks. The tour highlight was a walk out to the edge of the pier and a chance to experience the lake up close with a view of the Mississauga skyline. For many residents – this was the pinnacle culmination of many years of community engagement.

If you want to get a pulse of the future, just talk to the youth. This was another positive step in connecting inspiring ideas to the Inspiration Lakeview vision.

City of Mississauga staff from the Strategic Community Initiatives division led 350+ secondary students from Cawthra Park’s LEAP Program (Leaders Empowering All People), John Cabot’s Green Team, Port Credit and St. Paul’s through a wide ranging presentation about the potential for waterfront development in Lakeview. Then we turned the tables – and turned the ideas over to the youth.

After many, many, many conversations, we asked the youth to write it all down. Their ideas, their dreams and their reality, not ours – and how they would get behind their waterfront.

It’s all about the ideas

Students from St. Paul’s Catholic High School went so far as to model their ideas and dreams for Lakeview. Mr. Mondelli’s grade 11 and 12 class produced models to show what they wanted to see on the site.

We received 100s of postcards from the students depicting their ideas that covered everything from: affordable condominiums, environmentally-friendly mini malls with distinct food outlets, underwater art displays, markets for locally-grown food, open spaces for theatre and music, an interactive boardwalk, wind-activated sculptures, a skate boarding park, a statue in the water affording all with a panoramic view of the City culminating with four windmills out in the water to represent a change in environment – from the “Four Sisters”, the towers of the former power plant to the four windmills of the future.

They too, got behind their waterfront. 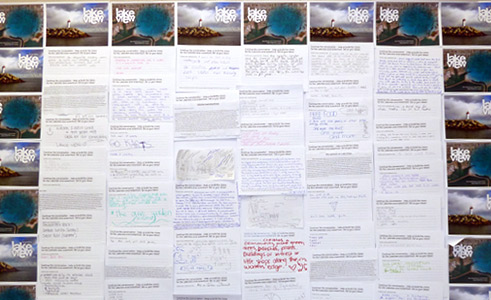 Surrounded by a capacity crowd of nearly 300 people, Inspiration Lakeview kicked off a series of workshops on October 6th to develop a vision for the Mississauga waterfront.

With residents joining together from all over the City of Mississauga, the evening was filled with people sharing their thoughts, ideas and questions about waterfront development in the Lakeview area.

Attendees heard from two leading experts about waterfront development, business challenges and the potential for a world class waterfront to call our own. The focus of the evening was to start thinking about the possibilities, potential and realities of Inspiration Lakeview. Joe Berridge, partner at Urban Strategies Inc., and Barry Lyon, senior partner and president of N. Barry Lyon Consulting, shared global examples of successful projects providing insight and inspiration to all.

The Honourable Member of Provincial Parliament, Charles Sousa, Mayor Hazel McCallion and City Councillor Carmen Corbasson greeted the crowd sharing with them their enthusiasm and dedication in turning the vision for Lakeview into a reality.

With the aid of a huge aerial study map, participants were asked to place a green dot on the places and features that they see as a positive element in the area. Red dots represented challenges or not-so-great aspects in the area.

This Poke-A-Dot wall serves as a highly visual way for the vision to take these things into consideration by building on the positive attributes of the area and working to improve the less desirable ones.

How can a photo or a word help to share your vision for the waterfront? By creating a massive wall with everyone’s images all combined into a collage of images – that’s how.

Participants chose the words and photos of things that sparked their imagination about what the waterfront could and should be for them. Share your words and images by emailing the team.

Send an email to the project team at inspiration.lakeview@mississauga.ca or contact David Breveglieri, Planner, City of Mississauga at 905-615-3200 ext. 5551 or email david.breveglieri@mississauga.ca.