There are many ways to travel in and through the City of Mississauga offered by various organizations. The City operates and maintains MiWay transit, city roads, sidewalks, cycling and pedestrian trails. Building a
transit-oriented City is a strategic priority for the City of Mississauga. Building regional connections to encourage transit use and offering active transportation options are important to the City’s future. 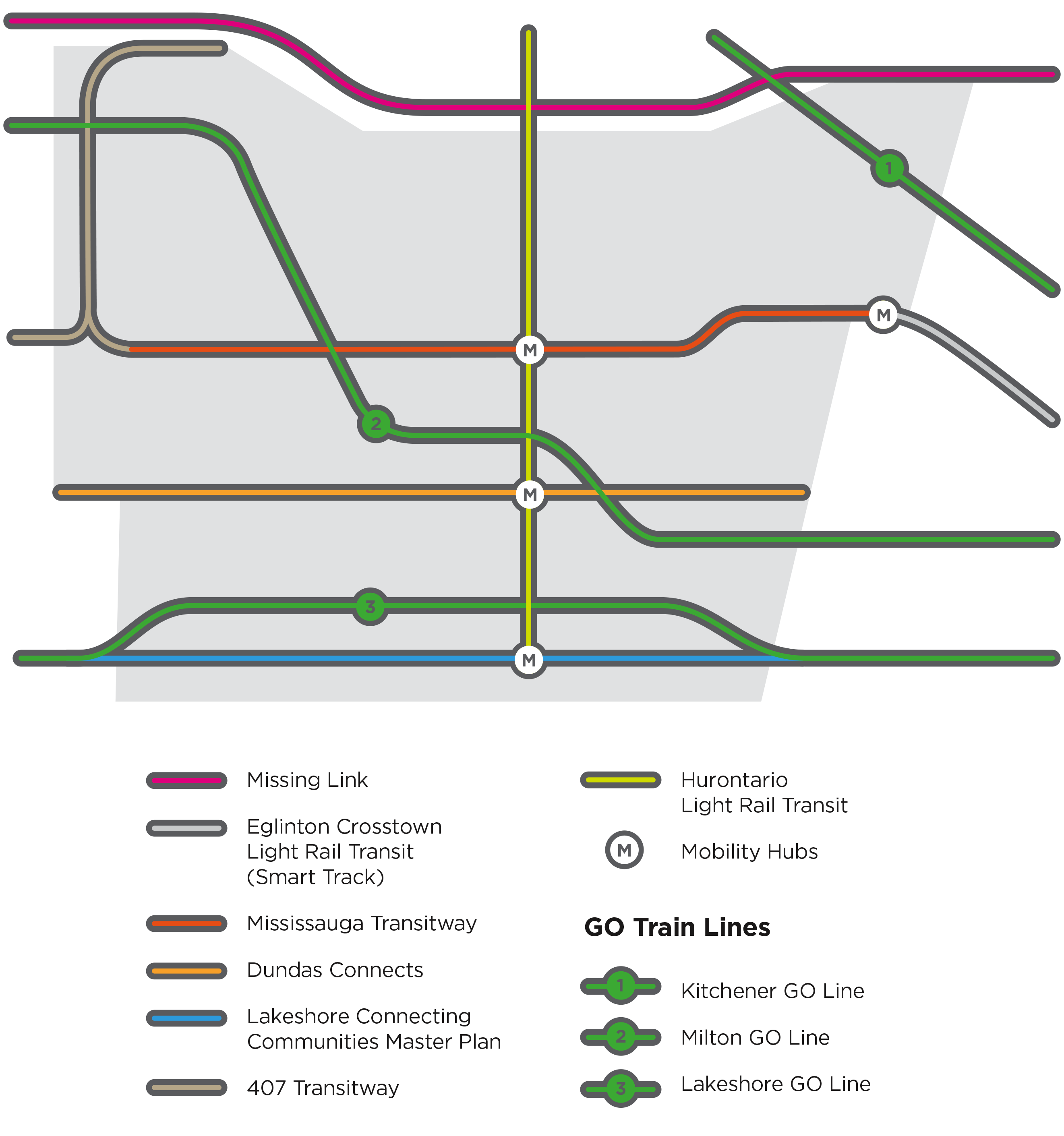 MiWay 5 and Transit Improvements | @MiWayHelps
Since January 2016 MiWay has been rolling out service improvements as part of the MiWay Five Transit Service Plan that moves Mississauga’s transit system from a design that radiates from the city centre to a grid network that will allow for more frequent buses along main corridors. MiWay 5 is a five-year service plan (2016 – 2020) built with community feedback to set the stage for more transit expansion and a new light rail line along Hurontario Street.

Cycling Master Plan
The City of Mississauga has 400 kilometres of on-road bike lanes, boulevard multi-use trails, off-road trails as well as roadways that have posted bike route signs that are “bicycle friendly.” Through the Cycling Master Plan, the City plans to develop more than 900 kilometres of on and off-road cycling routes in the next 20 years.

Credit River Active Transportation Bridges Class EA
The City of Mississauga, in partnership with the Region of Peel, will be undertaking a Municipal Class Environmental Assessment Study and a Detail Design assignment with the Ontario Ministry of Transportation (MTO) to identify the preferred locations for two active transportation crossings in the area of the Credit River and the QEW. This project would provide the City and the Region of Peel the opportunity to advance a key multi-modal initiative to deliver these critical links along the hydro corridor trail, which is ultimately envisioned to traverse the City of Mississauga from Halton Region to the City of Toronto.

Dundas Connects
The City of Mississauga is developing a long-term, future-oriented Master Plan for the Dundas Street Corridor. The plan will shape the future look and feel of Dundas, focusing on transit, land-use, and public space.

Lakeshore Connecting Communities
The study will build on recent planning studies to develop a design for the Lakeshore Road corridor from building face to building face that supports all modes of transportation, connects people to places, and moves goods to market. The study will also evaluate rapid transit alternatives east of Hurontario Street as well as extending rapid transit into the Port Credit area.

Missing Link
The Ontario Provincial Government has announced a policy of providing two-way, all-day service on existing GO Transit rail lines. For the Milton and Kitchener lines, this is prevented by the presence of heavy freight rail traffic. The Missing Link is a package of rail improvements that would allow for substantially expanded two-way, all-day service on the Milton and Kitchener GO Transit lines by relocating heavy freight rail elsewhere.

Eglinton West LRT Extension | @Metrolinx
The GO Regional Express Rail (RER) program, and particularly plans for GO RER within the City of Toronto, sets the context for SmartTrack. SmartTrack proposes utilizing the GO network to provide a more urban transit service than originally contemplated with GO RER. In February 2015, Toronto City Council directed the City Manager to carry out a SmartTrack workplan and requested that Metrolinx include a number of SmartTrack elements in GO RER. SmartTrack includes a number of components including new stations, TTC fares, TTC service integration, frequency improvements on the Kitchener and Stouffville corridors, as well as an LRT along Eglinton Avenue West to the Mississauga Airport Corporate Centre and Pearson Airport. This connection to the Mississauga Airport Corporate Centre and Pearson Airport is an important transit connection for the City of Mississauga. Metrolinx and City of Toronto staff reported to the Metrolinx Board in June 2016. The associated report can be found at the above link.

Fare Integration | @Metrolinx
Metrolinx and their transit partners across the Greater Toronto and Hamilton Area (GTHA) are working towards a consistent approach to transit fares in the region.

Hurontario Light Rail Transit | @HurontarioLRT
The Hurontario light rail transit (LRT) project will bring 20 kilometres of fast, reliable, rapid transit to the cities of Mississauga and Brampton along the Hurontario corridor with 22 stops.

Port Credit GO Mobility Hub Study and Redevelopment | @Metrolinx
Metrolinx, with assistance from the City of Mississauga, has prepared a Master Plan for lands south of the Port Credit GO Station. The Master Plan addresses, among other matters, land use, built form, transportation and heritage.

Regional Express Rail | @Metrolinx
Metrolinx has over 200 projects worth over $16 billion already underway with the goal of transforming from a rush hour commuter service to a two-way, all-day regional transportation service.